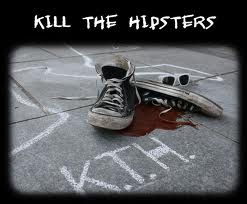 I have this young friend. I've known him since he was a little kid. He's a young man and I like him very much but he likes every sucky band on earth. It's hard. He can't get over how great The Strokes are. I can. Ha. Word verification is disms.

couldn't agree more. I went to see the stokes when they were first touted as the next big thing, i walked after 3 songs and went to the pub, which was populated with pissed off people who had spent a tenner to see these half wits, we all had a common bond, it turned out to be a great night because the strokes sucked.
A.J

yessss! The Strokes. . . ugh. I remember in high school 2 radio stations were playing their 3 sound-alike songs, constantly. so then I get to NYC and my roommate was like, hey you know my favorite band? Have you heard of them? The Strokes? And I was like, what, does New Jersey not have radio? Because I'll trade if I don't have to hear the Strokes. ever again.

Though they have become the poster children of people who go to art schools and boarding schools, so I should thank them for reinforcing my stereotypes. I like when that happens.

I'll admit I was excited about the Strokes when they first started, but it wore off quickly. They (to me, anyway) failed to live up to the hype. I just never got what it was they were supposed to be. And I saw them live once - it was a mess.

I think I made a similiar post when I was blogging and I seem to remember taking a beating for it. hahha!!

Psst. Dude. The Ramones were a NYC band. So were the New York Dolls, and the Velvet Underground.

Totally get you about the Strokes, though. Auggghh.

The Strokes represent everything I hate about MODERN NYC bands

A majority of The Strokes are married with kids. Lol