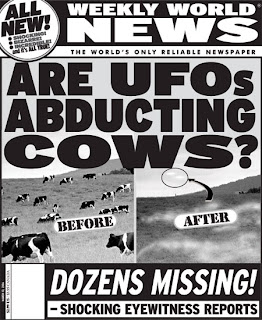 
Posted by Nazz Nomad at 10:24 AM No comments: Links to this post

I Was A Teenage Guinea Pig 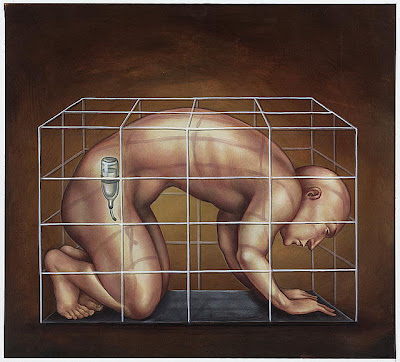 Way back in Nazz's young teen years, he was a poor white boy looking for some money. My mom heard about a facility in the area that would pay $20 a week to kids who would allow various substances to be applied to their backs and checked a day letter for "reactions". Yeah, cosmetic clinical testing. SO, I became a Teenage Guinea Pig!

Now... before you look away and say "what the Fuck is wrong with Nazz's mommy for letting her son do this"?; remember, this was the innocent days of the 80's and out there in  the hinterlands, people weren't quite so suspicious of big business (or, for that matter, men in white coats and facemasks in labs).  Yeah- I know. Not too smart.

So, every week, I would go in, and the nice attendants would apply a pad the size of an open palm to my back. This pad would have whatever lotion or concoction that they needed to make sure wasn't too lethal to humans. One would assume this was after the bunny rabbits and chimps had survived; but, really, who knows? After all, teenage boys were made of far sturdier stuff. The next day, the pad would be taken off and my skin (funny, they never worried about anything but the skin- so if I had any toxic poisoning or nerve damage... too freakin' bad...) would be checked for outbreaks.

I did this for about three months.

Every week, when I got my crisp $20 (always in cash) - I would take it to the local record shop. They had a tremendous used vinyl area (this WAS the 80's) and for anywhere from one to three bucks, I could buy "rescued" albums from the 60's and 70's and further my musical education.

Ya see... you young whippersnappers, what we had to do back in the day for our rock n roll? Now it's all easy peasy to download anything you like in 5 seconds.

Weird, I had completely forgotten about this until last nite, when the head that grew out of my back reminded me.

One day, I'll tell you the story of when we got the bright idea to sell our blood in college for booze money. 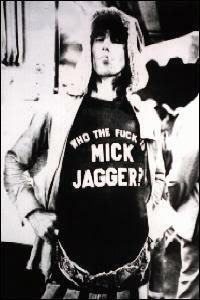 Here's my review of the Keith Richards auto-bio "Life". It's taken awhile to bother reading it since I wasn't going to fucking pay for it, and I had to wait until all of the Rolling Stones' fans who were too cheap to spend the cay-ish were done and I could get it from my library.

The following is the short review:

Fuck you Keith Richards and stick the 550 pages of this up your ass; where I hope it backs up your bowels and causes your entire body to explode like Mr. Creosote in "The Meaning Of Life".
BECAUSE- You're the coolest multi-billionaire muthafucka out there and I... Am... Very... Jealous.

I wanna hang out with Keef. Of course, trying to impress him, I'd end up acting like an asshole and being a douchebag.
On the other hand, I'm a nice guy... aren't I? WHY WOULDN'T Keefy wanna hang with me?
Hey Keef- call me... I'm listed.
Oh yeah, can I call you "Keef"?

Keef at the Beggars Banquet
The longer synopsis:
In which a hatchet faced, former pop icon, who has been trading on past glories since 1973 ( don't confuse this with Patti Smith's new book as I didn't say 1978), writes of his addictions and foibles. He rips on "Sir Mick" (newsflash- Keefy is not exactly a fan of "Sir Mick" - but when yer married for the money, you gotta put up with it), and tells stories of fun times with Gram and Brian and Bobby Keyes, etc. There's some references to drug problems too. Keef was into drugs???? Who knew? Next thing yer gonna tell me is that Glenn Danzig used ta be in da Misfits!

The auto-bio for those with short attention spans:
I was legit, I worshiped Chuck Berry and Jimmy Reed. I put in my time. I hated wealthy people, I was from the wrong side of the tracks. I was cooler than shit. Ya know, back in 1965, I wrote really good stuff. Than a few more cool songs, until I was led by the vein for the past 40 years by my banker. I'm taken out every few years for a billion dollar tour, where I play several chords and mug for the camera. I've fucked alot of hot chicks, taken alot of drugs and gotten into all sorts of hijinks. And I still hate rich people! And, open G tuning is the answer to everything. And... "Jumping Jack Flash" is the same riff as "Satisfaction"... backwards! Oh yeah... I owe everything to Chuck Berry... and Chuck Berry's a dick!


Mr. Butinski responds:
All with-out doing a single thing of musical interest since "Some Girls"... and you can probably back that up to "Exile" anway, since Keefy was probably too wasted to even remember his very first disco sell out elpee.That's what I wanted more of... some apologies for squandering what was one of the world's greatest r n r band's legacy.
On the other hand:
Muthafucker is rock n roll incarnate (for good or bad- I never saw the rulebook that sez r n r has to be altruistic). He can sit on his pile of money, shooting up and pissing down on everything single one of us if he wants... ps- Jerry Fucking Garcia never gave away his $$$$ either... and wasn't even a good enough junkie to survive. Although, I think the chocolate donuts killed him, not the China White.

Keef did it "his way" (as long as Sir Mick and the moneychangers said it was O-Tay).  And the book is pretty savage and open and (I assume) honest.

Who ever transcribed Keef's 'umblings into this lively and highly entertaining book should be knighted. Or something. At least given access to Keefy's private stash.

The dude gets major props for killing Brian Jones and screwing Anita Pallenberg and Patti Hansen. I used to have a Patti Hansen poster. Eventually, it was able to stay to the wall without the benefit of tacks or any other "unnatural" substance. Just a little epoxy from the young Nazz's gonads. Get it- another pun!!!!!!!
Remember having posters on yer walls? I had the Farrah one too.

I spent alot of time in my bedroom. Than, I put up a fucking Jethro Tull poster. Ian Anderson, in some sort of "Men Without Dicks" Safety Dance jester's outfit. Or something. Playing a flute. I HAD A POSTER OF A GROWN MAN PLAYING A FLUTE ON MY WALL! Why my dad didn't come in and beat the shit out of me on a nightly basis until I removed that poster is something I will never understand. Let me tell you, if MY KID puts up a fucking Thom Yorke poster, I'll knock his fucking teeth out. I don't care if it's a Thom Yorke poster showing him drinking the blood out of George Bush's skull with a straw made from Nancy Reagan's windpipe... I'll still beat the crap outta him. 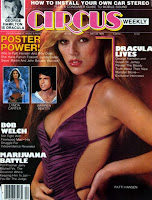 Keef got to bang these chicks when they were hot.
Keef wins.
Summation: Great book.  Could have done with more drug and sex tales. Maybe a mud shark or two. Hope the sequal is a 500 page transciption of Cocksucker Blues. Though Keef doesn't really remember any of that era. Perhaps a diagram on how to main-line. Only other book that comes to mind that was more drug oriented was "Please Kill Me". And that book doesn't make the life of excess sound as much fun as Keef does.
Like I said, Keef- call me!
Posted by Nazz Nomad at 12:10 AM 3 comments: Links to this post