The Most Magickal Day 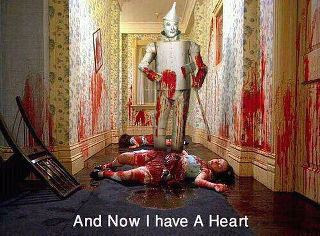 Posted by Nazz Nomad at 9:19 AM No comments: Links to this post

Email ThisBlogThis!Share to TwitterShare to FacebookShare to Pinterest
Labels: ramones, the dickies

I Am A Huge Fan Of Bad Religion

So sayeth Fat Mike and NOFX.. and Yeah- I dig em. I like the NOFX song too. What's not to like about Bad Religion? Great lyrics. Anti-authority. Great chorus's. I love the harmonies. They're old and pissed, just like me. And I learn new words when I decipher their songs!!

They've got the punk rock cred (and that's not even taking account Greg Hetson's Circle Jerkdom and Brian Baker's Minor Threat service). When did How Could Hell Be Any Worse come out? 1938?


Besides, I took Princess Nomad to see 'em when she was 13 and she actually loved it. And Nazz Jr has been known to wear a Bad Religion shirt to middle school!

It's The Muppets world, we just live in it

Clearly this is the greatest thing of all time.

Posted by Nazz Nomad at 2:14 PM 2 comments: Links to this post 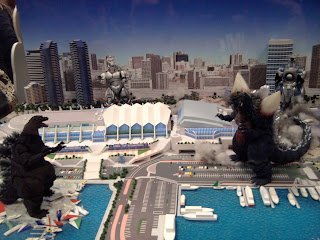 Nazz Junior and I attended the New York Comic Con and had a blast. It was packed to the gills with freaks and geeks and cosplayers. I'd say about 20% of the attendees were dressed up as anything from CM Punk (wresting icon worship at Comic Con?) to lots of Asian teens in various anime to the tried and true super heroes (heavy on Cap America and various X-Men). One guy was decked out as Professor Xavier - complete with wheelchair. I wasn't going to be the douche that asked Prof X if the wheelchair was for sizzle or part of his daily steak. 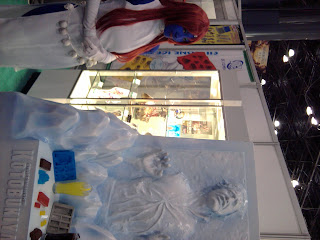 A blue chick and a frozen in carbonite space cowboy
The only goal for me was to get some contacts that would buy my old comic collection. Times are tough, and if I can get some dough for my old 1960's-70's Marvels, all the better.

The big downer was that many of the sessions were closed due to overcrowding at least an hour before the scheduled start.  We missed all the cool zombie stuff. The Walking Dead preview, a premier of some movie called Zombie Apocalypse (with Ving Rhames) and The Avengers preview were all out of reach for us. 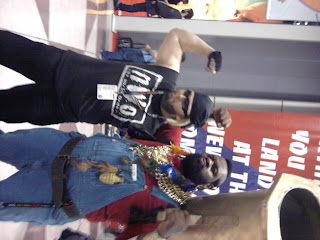 Mr. T and Hulk Hogan. Not.
However, we got totally stoked with The Marvel TV and Marvel Games previews. And Nazz Junior grokked on the Halo panel. They had the developers of the game talking about the new version (which basically is a higher tech reboot of the original game. And there was a woman on the panel!!!! Which got most of the fanboys very excited. The q & a for the Halo panel consisted mainly of guys asking the woman on the panel if she would be their prom date! OK- that didn't really happen. 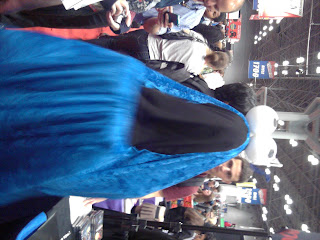 Missus Nomad's favorite picture. A Yip from Sesame Street
Another amazing event was the Dragonball Z panel- which capped the evening. The panel consisted of three guys that did the voices of the cartoon, and they were greeted by several hundred devotees as if they had cured cancer. Even the panelists were shocked by the adulation. Then one of the old Dragon Ball Z cartoons (they've all been restored for hi-def) was shown and it was like watching the Rocky Horror Picture Show, witht he audience participating. My son looked at me and said "You have know idea what's going on, do you?". And I didn't.

And then of course, there was this. Archie meets Kiss. WTF? Is nothing sacred?

For me, the best part was spending the day with my kid. I hope he looks back on it in a couple of decades and smiles.
Posted by Nazz Nomad at 11:27 PM 5 comments: Links to this post 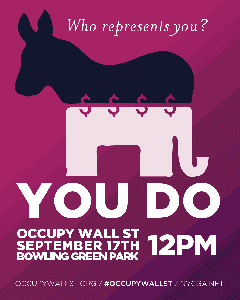 With the Occupy Wall Street movement spreading to other cities, the media is paying a modicum of attention. Unfortunately, peaceful demonstrations are not going to get anything accomplished. Now that some Unions are involved, hopefully there will be some long term organization and goals. Demonstrations at the Koch brothers and Rupert Murdoch's mansions are nice, but burning em down would be better.

However, what will really get the media involved will be violence. As abhorrent a concept it is, cracked skulls and riots will be what really starts the ball rolling.

That's what will get heads turning.

Talk minus action equals nothing

Posted by Nazz Nomad at 9:46 AM 3 comments: Links to this post

Do You Remember When You Were Young And Wanted To Set The World On Fire? 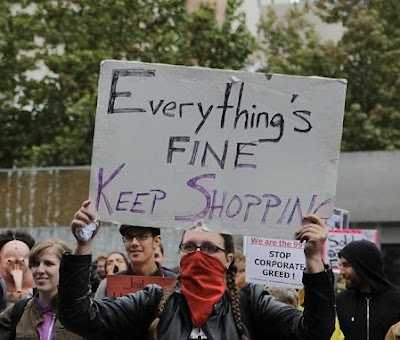 Walked past the Wall Street demonstrations again. Sound and fury symbolizing everything and accomplishing nothing. How about we all stop buying shit for a week from some companies? It's called boycotting. That's the only way the fuckers will ever notice... if it hits em in their bottom line.

I've been listening to Against Me lately. Third or fourth or ninety seventh generation punks that wear their hearts on their sleeves. Anthemic ringing guitars and earnest lyrics.

Posted by Nazz Nomad at 7:53 PM 2 comments: Links to this post

Email ThisBlogThis!Share to TwitterShare to FacebookShare to Pinterest
Labels: against me

Marriage Is swell, and for the most part better than Wilco 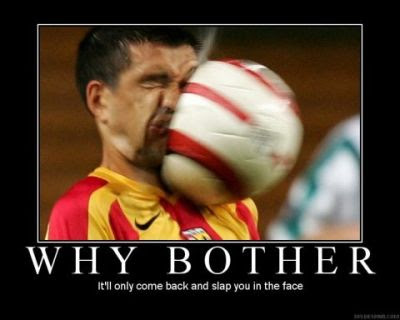 "What kind of face is that?"; Missus Nomad said to me yesterday over dinner. "Umm, my normal face?" I answered. Then in the middle of the night, she woke up and looked at me and screamed.

Hey honey, get used to this mug, you've had 20 plus years to accept it and I ain't going nowhere.

Wilco has a new album out and I am as ambivalent to them as always. I gave the lp a couple of spins on Spotify and immediately forgot every song. I do like that Jeff Tweedy and his band have been able to fashion a semi lucrative career and also become darlin's of the NPR crowd. They seem to be one of those bands that I'm supposed to like, but they just bore the shit out of me. My big Wilco experience seeing em live was drinking myself into oblivion and staggering out of their show a few years back. Blind drunken stumbling seemed like a better choice than standing and watching em.

I wouldn't put them in the same slot as a band like Pavement. I really hate Pavement. In fact, if one of the guys from Pavement came up to clean my windshield, I'd put my car into drive and run em over.

Jeff Tweedy on the other hand, I'd ask him to jump in on the passenger side and we'd go for a beer. He seems like a really cool guy. As long as don't have to listen to his band.

Maybe there's something wrong with me (and not just my face).

Wilco has "curated" a "YouTube channel" with some of their favorite other bands and I prefer 90% of the stuff on it over Wilco's own stuff.

Here's my favorite Wilco song. It's Closer To Fine, by The Indigo Girls and has nothing to do with Wilco. I'm pretty sure Amy Ray would kick Jeff Tweedy's ass.

Actually- I like this Wilco song alot. Probably because my friend John used to play it on his acoustic guitar and I always thought it was his song. And it's about being a fuck-up. And I bet the character in the song got asked alot about his face too.

Posted by Nazz Nomad at 5:54 PM 6 comments: Links to this post