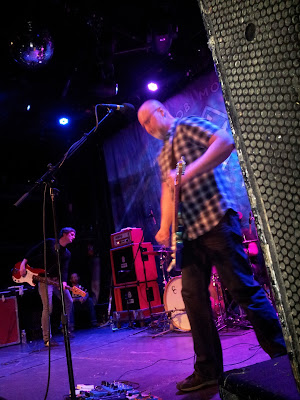 Ah, what could be nicer than to see bouncin' Bobby Mould- all happy, hale and hearty 31 years after I first saw him with Husker Du.

I wuz at the 2nd of the 2 nite stand at The Bowery Ballroom to see Mr. Sunshine. In the last coupl'a years, he's released a fine auto-bio, recorded his best lp since Workbook and apparently shed alot of self-hatred.

It was extremely easy to slice through the crowd in about 30 seconds and plant ourselves right by Bob, even though the guitar monitor was about 12 inches from me. Shit, I'm half deaf already, so a little more tinnitus for the cause of the rawk en rowl is a small price to pay.

So, into the fray Mr. Mouldy, Jason Narducy (bass) and Jon Wurster (drumz) stepped. Leading off with a buncha songs from Sugar (though, not the full elpee Copper Blue set from last year), Bobby-kins was shredding on his blue Strat. I gotta admit- I miss the old Flying V gee-tar, but hey, everyone's entitled to a little change I spoze.

After about 7 songs, Bob sez he's gonna play some of the new Silver Age album. I absolutely love this record and was a little sad he didn't play the title track. But toonage such as "The Descent", "Star Machine" and Steam Of Hercules" were just ducky. 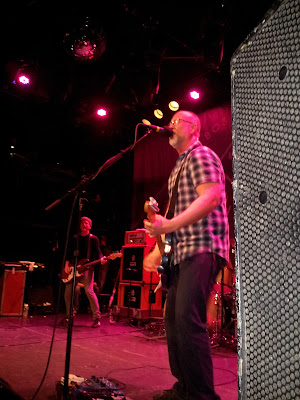 And then... time for the "oldies portion (aka HUSKER MOTHERFUCKING DU).
"Flip Your Wig"
"Divide & Conquer"
"Hate Paper Doll"
I believe that this is the first tour that Mould has played these songs on since Hu-Du broke up.
Fred Armison from Saturday Nite Live came out to do backing vox and rhythm guitar for the first three songs. Don't mock him... Freddy got street cred- he used to drum for alt-rawk band Trenchmouth back in the 80's. He was clearly thrilled to be playing up there- if a bit nervous looking. It's one thing to act in front of millions on TV- it's another thing to avoid fucking up on a Husker song!!!!!

Then- even more Husker Du!- "Something I Learned Today", "Chartered Trips", "In A Free Land".
I saw "Real World" and "New Day Rising" on the setlist, but I think they ran out of time and they didn't play 'em.

Well, anyway-- an ass kicking show- While I really enjoy sad mopey Bob ("Hardly Getting Over It", "Too Far Down", etc)- it's great to see him with so much energy and verve.


And here's the video of the year!~!!!!!!!
Gatorade should make a Bloody Mary flavor- I'd buy it!
Posted by Nazz Nomad at 6:14 PM No comments: Links to this post

Email ThisBlogThis!Share to TwitterShare to FacebookShare to Pinterest
Labels: bob mould, husker du, i'm old but i got to see all the cool bands, sugar 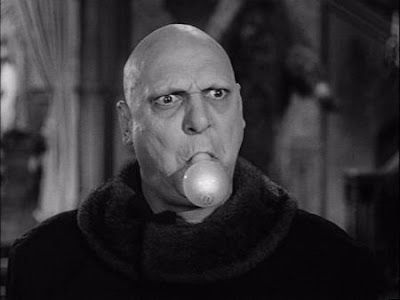 A blast from the past

Nobody but me - The Human Beinz

Nazz Nomad & The Nightmares- Nobody But Me

Sometimes The Universe Works Itself Out 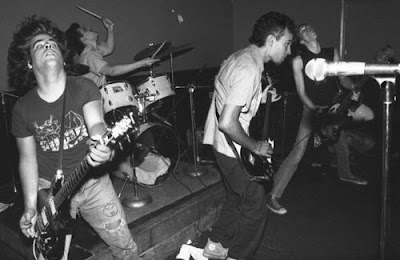 ADRENALIN OD'S classic "Paul's Not Home" has just been covered by Jack White (he of the 70 or 80 different bands he's in) and Gibby Haynes (Butthole Surfers).

My love for AOD goes back to the nascent 80's and seeing them at CBGB's on Xmas eve. After the show, we tried to get into Midnite Mass at St Patrick's Cathedral and were refused entry (I guess they frowned upon non Xtians dressed in MC jackets and combat boots).

AOD were a great and really funny Hardcore band from New Jersey and songs like "AOD vs Godzilla", "Rock N Roll Gas Station" and "White Hassle" will always have a place in my heart.

Click here for the remake of "Paul's Not Home" and below is the entire AOD "Wacky Hi Jinks" lp . . .

Too Old To Rock N Roll?

I had the opportunity to get tickets for the big Foo Fighters "Sound City" gig in NYC next week. For the princely sum of $100- a chance to see Dave Grohl & company back up such legends as Lee Ving, Rick Nielson, John Fogarty, Stevie Nicks and Rick Springfield (Rick Springfield?????).

I did a little research and found out it was a 3 1/2 hour show- in a large facility that is standing room only. I've been to the place (Hammerstein Ballroom) before- and they pack em in like sardines. That, and a guaranteed hour long line in the cold outside waiting to get in... killed the deal for me.

When I was younger, these "obstacles" would have been shrugged off.

These days, the thought of being pressed into and having to stand for that long is abhorrent.

What the Hell happened???? Guess it's just the aging process- but I'm bummed at my laziness. I'm still out partying until the wee hours many nights, but I'm also having a tougher time recovering.

It ain't the years, it's the mileage.

So I sit here typing this as I listen to Millions Of Dead Cops and wondering where my youth went.

And- you kids- stay the Hell off my lawn!

The Roof Is On Fire 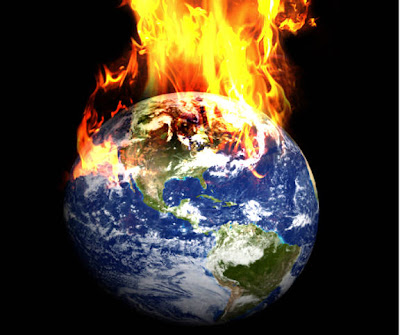 We don't need no water—

Posted by Nazz Nomad at 2:00 PM No comments: Links to this post