I feel like beating a puppy to death with a sack full of kittens.
Instead,
With apologies to the good folks at Slave To Shuffle, here's the next five up on the queue with pithy comments included.

Black Sabbath - After Forever - One of those songs from my acid drenched youth. Coming right after "Sweet Leaf", Ozzy sings about the consequences we all face after becoming worm food. Singing about God's payback being a bitch? Maybe Oz got a bit nervous after singing NIB on B.S. 1? Spirituality and a killer bass line from Geezer Butler. Jeezus, Master Of Reality is sooooooo fucking great.

L7 - Hanging On The Telephone -The chicks in L7 had bigger balls than any of the boys in Blondie. And they were all a whole lot hotter than Debbie Harry! Bonus- L7 was a band called "Camel Lips" in John Waters' Serial Mom.


Replacements - Sixteen Blue (outtake from Let It Be sessions) - Big surprise the'Mats came up. Not. Never one of my favorites, but I know alot of the kids identified with this song back in the day. With the ballads, I preferred "Unsatisfied". And "Tommy Gets His Tonsils Out". Yeah, ballads. Or something.

AC/DC - Shot Down In Flames - The only AC/DC that matters to me is the Bon Scott version. I respect that they have kept it going, but Brian Johnson has always sounded like he's trying too hard. As a result, his singing comes across as a pale, screeching impersonation of the master. I will always be indebted to AC/DC because, along with the Ramones, I can always figure out how to play their bass lines. 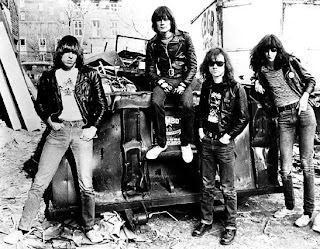 No one ever rocked the leather m/c like the Ramones.
Thanks to this post at Strange Reaction, I got to thinkin' of my original m/c Black Leather Jacket. It was 'round 1983 or so and, being the broke suburban kid I was; I didn't have the cash to buy one. It always amazed me that the so-called gutter punks all had em... probably mommy and daddy bought em for em when they went back to their Connecticut homes.

But I digress. I started going out with this girl who's parents definitely had serious bucks (her dad was a dentist in some Long Island high falutin' town). She was a couple of years younger than me and probably figured it was cool to be dating Mr. College Asshole Nihilistic Punk Rocker. Aside from her proclivity towards supplying me with drugs and payin' my way into stuff, she was pretty cool in other ways. Once time she made me this really cool Suicidal Tendencies shirt (like the one's that were pictured on the original album cover). I actually still have the back of that shirt.

Anyway, we were all also into the Grateful Dead and one day she presents me with this beautiful heavy duty (not some asian knock-off) Schott MC jacket. Only one problem, she had painted this absolutely kick ass Steal Your Face graphic on the entire back of the jacket.
Well, no way was I going to wear THAT to punk shows. It was bad enough I had long hair. I didn't want to spend ALL my time fighting.
Sooo... Mr. Asshole spray-paints the entire back of the jacket back to black and than throws the usual punk stickers de rigeur on the back as well. My girlfriend was crushed. But I was such an inconsiderate douchebag to her in other ways, I guess she chalked it up to my sparkling personality.
This jacket served me well for many years. It also got totally beat to shit, but survived (it was really well made). Than I left it at a friend of mine and he somehow lost it. Thanks for that, D.

In retrospect, I was a complete dickhead for destroying the jacket. And I hope my ex girlfriend found someone to treat her a fuckload better than I ever did. At least HER pain is over. She didn't marry me!

Here's some Kraut. I had a Kraut sticker on the back of my jacket. Were we ever that young????
Bookage:
The Replacements: All Over But the Shouting: An Oral History - Jim Walsh

Gettin' Nowhere, Fast As I Can

Well apathy's got a hold on me
And it won't let go
Tell me your problem, I'll tell you mine
Motherfucker you're gonna know
Well I can go for a change
Go for a jog
Tell me about your rock band
Tell me about your BLOG
Shut up
Shut up
(...with apologies to Paul Westerberg)

Protect Me From My Enemy, Myself

Insanity is the only sane reaction to an insane society.

This might be a reason to stick around until 2009

How Many Local Dollars For A Local Anesthetic?

“Every man has inside himself a parasitic being who is acting not at all to his advantage.”
-- William S. Burroughs --

Now playing: The Royal Flairs - Suicide
via FoxyTunes
Posted by Nazz Nomad at 10:06 AM 1 comment: Links to this post


Now playing: Face to Face - I'm Trying
via FoxyTunes
Posted by Nazz Nomad at 7:18 AM 3 comments: Links to this post

Email ThisBlogThis!Share to TwitterShare to FacebookShare to Pinterest
Labels: ramones

All Things Must Pass

Sunset doesn't last all evening
A mind can blow those clouds away
After all this, my love is up and must be leaving
It's not always going to be this grey

All things must pass
None of life's strings can last
So, I must be on my way
And face another day

Now playing: Redd Kross - Get Out Of Myself
via FoxyTunes
Posted by Nazz Nomad at 9:47 AM 2 comments: Links to this post