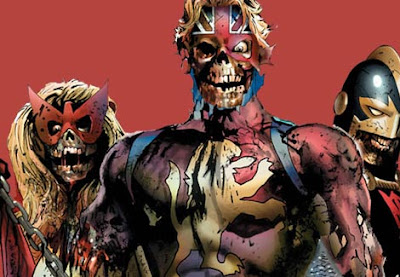 It started Saturday- body aching and a slight cough. No big deal, but a harbinger of things to come. By Sunday nite I was feeling as dead as Hugo Chavez's dick. Barely made it thru the Walking Dead and I'm pretty sure I looked just like one of those Zombies.

So by Monday morn, I was in full fledged ill mode. I had to go to a meeting and after I drove 25 miles in rush hour traffic, I get a call on my cell from the guy I was supposed to meet, cancelling the meeting. He was sick.

By the afternoon, I was hurting, but I had a major industry event in the evening and thought I could make it through an hour on the train and a 4 hour shmoozeathon. The lure was to meet one of my literary heroes. I won't say who, because if he ends up dying from talking to me I don't want the blame. But the guy is in his 80's, and I hope I didn't give him that "push".

By the end of the evening I couldn't speak, I was hacking lungers and my body felt like it was in a car crash. I barely made it back to the train for the way home and had to stop at a drug store and powerhit some Robitussin, just to avoid the "typhoid Mary" stigma from my fellow trainizens.

By the time I got home, my fever was in the classic rock station range (between 102 and 103). I can't swallow and every time I cough it feels like Iron Mike Tyson is throat punching me.

Then, as an added bonus, I was going into the basement to get my sweatsoaked bedding washed and I fell down the flight of stairs. So now I have a sprained wrist and a sore back and neck to go with my festering death flu.

HOWEVER- I will not be singing the following song with gardenias stuck up my ass. So I got that going for me!

A small victory, but a meaningful one.

Something to brighten your day:http://www.seattleweekly.com/2013-03-06/music/punk-rock-is-bullshit/full/

This sounds nightmarish. Take some flu meds, drink only water, and get lots of sleep - your temperature will be back in the college station range (98-99) in no time flat.

rinjo yeah i saw that article- i identify with some of it- (ie "the outsider/loser" thang) but alot of it is blather.