Of graveyards and crazy chicks 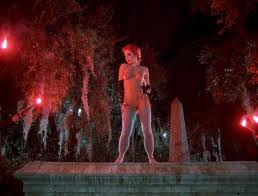 “My house is right in back of the graveyard”

Two things I was NOT looking for were female companionship and a fistfight.

So, as I sat at the bar of my new favorite tavern, I was content to watch a replay of the Yankees game and nurse my Guinness.

Alas, the fates wouldn’t allow me to leave well enough alone, and soon enough, I was accepting free shots from one of the owners of my new favorite tavern (some concoction of coffee flavored Patron Tequila- tasty enough, but sort of sacrilege), trying bottles of bottled brew I was unfamiliar with (a banana bread beer, and a Quadruple Ale called Three Philosophers and lord knows what else).

Still content on not socializing with the other patrons, I nonetheless ended up in a conversation with the guy on the next barstool. He was hammered. Good for him. I like talking to hammered people, they've been touched by the beer gods, and I like to bask in the glow of their drunken holiness.  Next to him was his sister- they might have been twins- didn’t look alike, but I think they said they were twins. Twins- I don’t get it- it’s like fuckin’ magnets. Or something.

Soon enough, many more drinks were consumed- somehow I started alternating shots of Balvenie Single Malt with Jagermeister and we were all friendly like.

So when my new favorite tavern was closing, I was invited to join my new friends at another bar- to put it nicely- a “skell bar”- $1 Budweisers , faded neon and a couple of somewhat burly guys drinking. Funny thing is, I’ve lived in my town for 14 years and I had never even noticed this bar before.

And, if there’s one thing I DO notice, it’s bars in my neighborhood.

That’s when the “twins” told me they lived a few houses away in back of the graveyard. Once again, I never even knew there was a graveyard a few blocks from my house.

And, if there’s one thing I DO notice, it’s graveyards near my house.

I called “bullshit” on them, and the sister tells me that it’s a small boneyard in back of “the church”.
I asked if she was referring to the church down the block (which I knew about, as Princess Nomad had spent several nites in her youth as a Girl Scout doing overnites there), or if it was the church where the Priest had gotten busted for fondling little boys (I know- hard to believe a Priest would get busted for buggery).
She tells me it’s yet another church- which once again I knew nothing about.

And, if there’s one thing I DON’T notice- it’s churches around my house.

So anyway, I say something like “very nice” I’ll have to go look for it. She responds “I’ll take you to go see it now”.
At this point the Robot from “Lost In Space” was screaming “Danger Danger Nazz Nomad” in my ear, and I, for once, listened.
“Well, I just got another beer, another time, maybe”.
She goes outside to smoke a cigarette and I brood silently over my beer. Keeping an uninterested eye on  drunken boy twin fall off his stool and the 2 burly guys down the bar.

She comes back in and says “you stole my $5 dollars”. I look at her and say- “What are you talking about” and she tells me she had a 5 dollar bill on the bar and now it’s gone. By the lateness of the evening, in my pocket, I have a $100 dollar bill and 4 singles. I show it to her and say something to the effect that she is incorrect. Verrry politely and verrry slowly. Of course this brings the crazy out and she starts screaming and calling me a thief. I respond that: #1 I never steal anything small and #2, how likely is it I hung out with her and her brother all nite just to steal $5.

At this point I decide to call it an evening. I throw my $4 in singles on the bar and tell Ms. Nutty that I didn’t take her money, but if it makes her feel better she can have my singles.
She takes them and is screaming “thief” as I leave.

Only to be followed by the two guys, who confront me a few yards away and ask me why I stole the money.
This is going to end in violence, I thought. Despite my amazing powers of MMA, I'm a little too weary to throw a beating at these two.

So, I calmly again explain that I didn’t take psycho bitch's money and I had better things to do than discuss this with them. We're about 15 seconds from lighting the powderkeg.

Then I noticed one of em was wearing a Rush t-shirt.
So, I asked him what the deal was with Rush and he tells me he’s a drummer and that he loves Neil Peart.
And we get to talking about Rush and maybe us jamming together while his friend stomps away, pissed that the fight ain’t gonna happen. He shoulda counted his blessings.

After a few minutes we exchange phone numbers to gig together and I depart for home.

But first I decide to go find the church with the graveyard.

As I was walking in the church courtyard, the automatic sprinklers started spraying everything.
I went home wet & drunk, but unbloodied & unbowed.

Email ThisBlogThis!Share to TwitterShare to FacebookShare to Pinterest
Labels: alcohol, crazy chicks, you got the shining

My favorite Nazz line to avoid a beating is still " I have hemophilia, i'm a bleeder!"

oh jeez- i remember NOT avoiding that beating and ending up in the hospital pissing blood. And then getting fired because I missed work.

Ha! Screw the graveyard. Know what is creepier than that? It looks like my deranged spirit has taken over your blog. Wicked stuff.