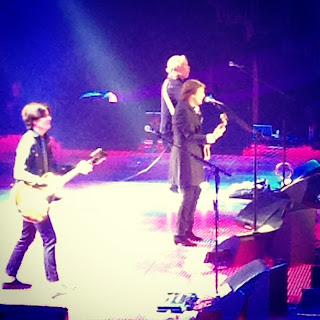 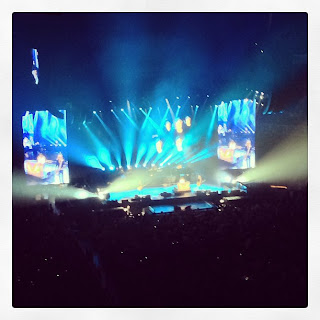 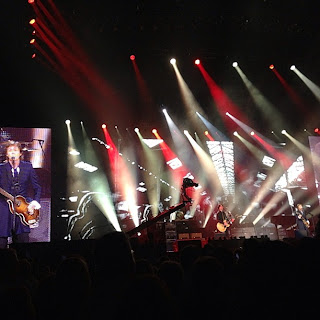 Some thoughts on the Paul McCartney concert I was at last nite.

Paul played guitar and piano much more than he did bass.

His back-up band has been playing with him for more years than the Beatles were together!

He brought out several chestnuts never before played on tour: “Lovely Rita”, “Being For The Benefit of Mr. Kite”, Your Mother Should Know”, “All Together Now”.

The dude is 70 years old and played non-stop for 2 ½ hours! He looks great.

That being said, the video close-ups on Paul were not that close up… high res 70 feet high does not make for a pretty picture for an old guy, no matter how well preserved.

Average age of attendees was probably about 45. After all, what young one could afford tickets that ranged from $100 to $500 (without mom and dad, of course!)

Emotionally tingling moments: “Hey Jude” (complete with audience sing-a-long), “Something” (dedicated to George and played on Ukelele, before th whole band joined in), “Here Today” (dedicated to and about John).

It was in Brooklyn… so the “Fuhgettaboutit Paul” sign was especially apropos.

He played “I Saw Her Standing There”- that song is 52 years old!

Cool Hendrix tribute!!!!! With a “Foxy Lady” jam in “Let Me Roll It”  -plus a great story about Hendrix playing Sgt Pepper live only 2 days after the Beatles released it!

“Yesterday” was played of course, but then Paul did a couple of lines from the original song title: “Scrambled Eggs”

When you think about the catalog of material that McCartney has, it’s absolutely staggering.  And when you hear 30 plus songs representing the best of 20th century music, it is humbling.

$10 beers and a horrible seating scheme (the upper deck is sloped dangerously steep) did not make for a fun customer experience.

Total dick move of the night- some old fuck ratted out a couple of people smoking some grass and they got tossed.

But the best part of the show was watching the joy my daughter displayed seeing the show!

Glad you and your daughter had a good time. Nothing better than attending a concert with your kids