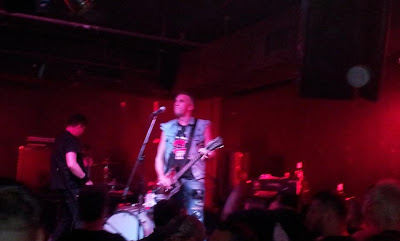 Saw DOA last nite. Joey Shithead (though now he goes by Joey Shithead Keithly- a nod to his political career) looked great, a bit greyer these days, but lookin’ healthy in his torn and patched jeans and sleeveless denim jacket (the Canadian Tuxedo). Thankfully, the band blazed (Joey even played geetar behind his back and with his teeth- holy guitar hero, Batman!). Joey was as unintelligible as ever (think of a Grizzly Bear singing) and the old and newer songs sounded great. I think I first saw them as a tyke in ’81, and it’s probably a small miracle that they are still a-showin’ and I’m still a-goin’.

And then tonite, the Angry Samoans are playin’! I would have liked to have gone to that too, but I’m lazy, it’s a Sunday nite, and besides, “Breaking Bad” is on. Yeah, white and lazy.

Speaking of which, the one show I woulda loved to have gone to was The Replacements re-union at Riot Fest a couple of weeks ago. Though, imma not big on this reunion talk, since imho the ‘Mats were done when they threw smokin’ and drinkin’ Bob Stinson out and the band became a Paul Westerburg solo project.

But, dang if I wasn’t weeping like a little girl and pogoing at 3 am, watchin’ the ‘Mats footage from the show. “Bastards Of Young”, “Left Of The Dial”, “Takin A Ride”, “Color Me Impressed”, “I’m In Trouble”... something about seeing that vidage & hearing that toonage reduced me to my 18 year old ghost.

That’s an emotional response I didn’t expect (especially as I wasn’t there in person).

But that’s what music can do to ya. It was fun yellin’ out the songs with Joey at the DOA show, and I am sure my visceral reaction will be the same seeing the Keith/Dez/Chuck version of Black Flag this Thursday. BF & DOA were huge bands for me back in my yoot.

However, something snuck up on me watching that ‘Mats show.

I watched the crowd singing along to every song- yeah, some people were probably really annoyed by that.

All I felt was envy. Wow, to be part of a huge crowd where everyone was feelin’ it. And yet, even as part of the teeming masses, you would still have this personal stake and response to the songs.

What a rare privilege that would be.
Posted by Nazz Nomad at 8:43 PM

Email ThisBlogThis!Share to TwitterShare to FacebookShare to Pinterest
Labels: angry samoans, black flag, doa, i'm old but i got to see all the cool bands, replacements

Y'know I've seen D.O.A. live more than any non-local band (it's gotta be in the double-digits) but the last time I saw them they still tore the roof off the place!

The smaller the camera and the further the distance from Joe gets the best picture of the man who almost made the Smiling Buddha famous.

The Flag show was great. Got my 43 yo ass knocked on the floor and TSOL were great in between days.. songs. Missed you Nazz.. always look out for you at the old time shows. Then again you had the pleasure (by a couple of years) of seeing some of these guys in person and poor.