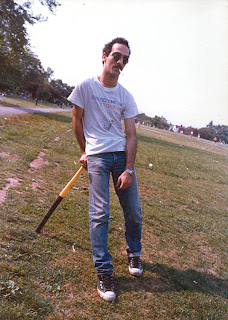 12/31 or 1/1 would have been my buddy Kim's birthday. We never could figure out which one it was and he was kinda vague about it, so we would split the difference and celebrate it at midnite, when everyone was celebrating the new year.

Kim was an usher at my wedding, and practically a brother to both me and my wife. Kim wasn't from the USA originally, so he was sorta on the outside looking in a bit. But he assimilated pretty quickly. He was an avid participant in all of our twisted reindeer games, and was a constant at all the shows. Tons of Punk shows, Garage shows, Dead shows, Floyd shows, etc. Plus, he would drive and get our sorry asses home afterwards. I guess he must not have drank as much as the rest of us, but the other "accoutrement's" of being young and stupid were certainly visited upon him as much as the rest of us. It's kind of a miracle that he never got killed or pulled over in the various incarnations of "Death-Mobiles" he drove.

Kim died in a bicycle crash during the NYC Five Boro Bike tour in 1997. He was grievously injured as he was going down a hill really fast and went flying over his bike and did a header into a concrete barrier. Yes, he was wearing his helmet, and it split open and also split his skull in two.
When we got the call about it, and rushed to the hospital, Kim was on life support, his head bandaged and he was being kept alive by machines. The Doctor told us that the best we could hope for was that he would be in a vegetative state forever.
At that point he didn't even look human. You see your buddy all broken up and on machines and it's almost as if you're looking at a monster. It was quickly apparent to us that the quicker he passed, the better. I remember speaking to him, listening to the machines whirring and beeping, and telling him to "let go". Not that he could hear me of course.
Three days later , he was gone.

This was the first exposure we all had to DEATH. I am not talking about relatives dying, or some kid in your school that you vaguely knew cashing in. I am referring to the ripping asunder of our very small tight group of friends. You know, the ones you figure that will always be with you and one day you'd be in the nursing home laughing at all the stupid shit you did when you were young. It was strange, because the smart money would have been on Kim to outlive us all. I would've figured that any of us would have crashed, overdosed, or been killed before Kim. And a fucking bike crash. Un-fucking believable.

I think that none of us handled the next few days particularly well, but we had a small memorial service for him in a park, read some passages from some relevant books and songs and proceeded to get shitfaced drunk.
Several very strange paranormal things happened during these two weeks, and we all liked to think that Kim had a hand in some of them.

More times than I care to remember, I was an asshole to Kim. Inconsiderate, thoughtless, even mean. More than once, he even took a punch for me.
But he stuck out our friendship. I guess family is like that.

I wish I could say that I learned a valuable lesson from Kim, and maybe I did about loyalty. But I sure wish I would've treated him better. And I haven't learned enough, since I still treat loved ones worse than they deserve.

I still think about Kim all the time, especially when I am at a show that he would have been at. I have some of his old t-shirts and wear them at these shows. When I played gigs with bands, I would always wear one of his shirts or this cool leather vest with Husker Du and The Misfits and DOA painted on it. And it was a huge moment for me when I started playing Stiff Little Fingers' "Wasted Life" and I would dedicate it to him.

I still go outside on New Year's eve a bit before midnite and communicate with Kim. At this point that's all I can do.

Reading this at 3:50AM, and sure I am not the intended audience; but great job.

A nice tribute to our old buddy. It's 10 years already, that's amazing. Anyhow, you have a happy new year too. I'll talk to you soon.

Great tribute. I still think that is the definitive Kim portrait. A stand-up guy in a twisted world. My fond memories (amongst many) include having Kim drive me and my pal to a Buzzcocks/Hard-Ons gig all the way out in Jersey when we didn't have transportation. It was a helluva drive, but he was willing to do it at the drop of a hat. That and him telling me once that everyone should wake up to the strains of Hüsker's New Day Rising...Good punk rock times. In fact, whenever Nazz and cohorts got a little too wild (shocking! lol), Kim always was the one who mellowed things out. I respected him tremendously for that. RIP old pal, keep on skankin' in the sky.

Wow!! Was just going through your archives. I was on that ride, did about 10 of the NYC 5 Boro rides. Saw a lot of crashes during that time, but none fatal. I biked heavily from 1993 up until a few years ago, even did the NY to Boston AIDS ride in 2001. But lately the streets have become too dangerous, what with every other person a fat jackass in a tinted-window SUV with a cell phone clutched to his or her ear. Makes me feel sick for humanity...