An Open Letter To Steven Tyler 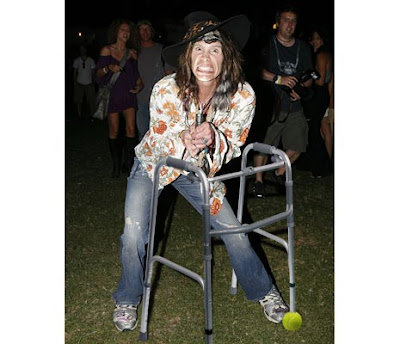 Dear Steven Tyler: BLOW ME. Eat my ass and suck my dick. You motherfucking asshole.

It's pathetic enough that you have have inflicted Diane Warren and Desmond Child penned treacle on Aerosmith fans (and Joe Perry and the other three relics in the 'Smith stand accused as well). However, your appearance on American Idol is the last straw.

Now, don't get me wrong, I could care less if you performed on national TV in a fucking tutu and fellated Jennifer Lopez's  2 inch cock while licking Ryan Seacreast's twat. Or did Tampax commercials. Or for that matter, ran for vice president of the USA on a Palin/Tyler ticket. Well, maybe that's a little too far. Palin's worse than AI.

However... WHO THE FUCK ARE YOU to deem what is and what is not "star worthy" or acceptable in music? Do you think that your rubber lipped persona circa 1971 would have even made it based on looks or for that matter "talent"? No fucking way. And yet, you sit on a panel crushing people's dreams. And, even worse... ridiculing them!!!!! Some of the poor bastards might have even picked up a guitar or dreamed of making it because Aerosmith music inspired them! And you lord yourself over them and, like a twisted 21st century Pontius Pilate, give these wretches a thumbs up or a thumbs down.

Do you need the money that badly for your next excursion into rehab? Are your alimony and child support payments too high? Or are you just another old and sad fame whore?

You piece of shit scumbag. You've destroyed your rock n roll legacy. I hope this insures you burn in Hell forever.

Meanwhile GIRL IN A COMA should find you and kick your lame wrinkled ass.

Email ThisBlogThis!Share to TwitterShare to FacebookShare to Pinterest
Labels: girl in a coma, steven tyler is a scumbag

You mean you just noticed that he's an asshole?

Let me qualify that. A friend met him in a non rock and roll context and swears that, in his civilian persona, he's a great guy, but as a rock star he sucks worse than most. That's saying a lot.

Fantastic. I stopped giving a crap years ago, but I had to move him WAY up on the douchebag list for Idol.

Good to see you spitting venom again. I think you nailed it with "just another old and sad fame whore". To paraphrase the Angry Samoans: Get off the air, Steven.

wow, you need to up your meds dude.
it's fucking show biz, it's not like any of it really matters.there's plenty of shit to get mad about, steven tyler's career choice is not one of them.

Fuck anonymous. Let him eat cake. Glad to see you back; lambasting the ridiculous.

Steven Tyler? Who cares? The guy's been irrelevant since... well... forever - or at least the early 80's. So now he's on an irrelevant game show that masquerades as some sort of talent show? Seems like an obvious fit to me.

This Girl in a Coma stuff, on the other hand! This is the stuff. They're new to me, but You can bet I'll be checking them out some more. So, thanks for that.

The dude who now looks like a lady joins the ranks of that bald twat from the Smashing Pumpkins in Dantes seventh level of musical Hell.

Strangely (ironically?), I first heard Girl in a Coma on a reality TV show that followed the band from TX to NYC, where they met Joan Jett and got signed to her label. Steven Tyler may be irrelevant now as a performer, but he's in an undeserved position of power and influence over younger artists -- I think that was Nazz's point (aside from inviting Mr. Tyler to toss his salad). Joan Jett has better taste in music and is a better role model for aspiring performers than Steven Tyler. And I say that as an Aerosmith fan.

Nice to see your back in the vile filled wrath that only you are capable of. Nice, never did like Aerosmith anyway, over hyped Zepplin wanna bees.

Never heard Girl in a Coma until now, like what I hear. . thanks

Fair play to Nazz (for admitting you watch this shite :-)

Oh my god! Joe Perry is a republican!!@!

Someoe should shoot the cocksucker!!!

as most of these old rock stars are both wealthy and hypocrites, i would not be surprised if most of em are also repugnikkkans. after all, there is nothing more self righteous than a reformed whore.

I do not mind watching my teenage heroes making asses of themselves on national television one bit. Better Steven Tyler than Donnie Osmond.

yay girl in a coma!

LOL! What a hilarious blog post! And I'm laughing AT you, not with you. He "lords himself over" the contestants??? LOL! What show are you watching, dude? Seriously man, chill before you injure yourself hahaaaa

Jitlted, talentless and jealous much?

Spot on mates!!! A friend of mine toured with him in the 80's and if the opening was too good Tyler would literally and simply unplug the bands power. What a cunt