My Name Is Legion 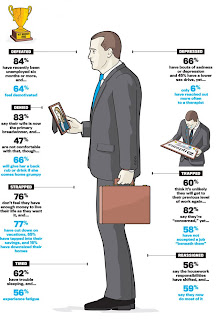 BWM (Beached White Male) is a new term for the “displaced” increasing number of Americans who are largely over 35 and either unemployed or working at jobs that are paying a fraction of what they used to make. The other day, as I was at my first med exam in over a year (now that my crappy paying job at least has good health benefits), my Dr. actually had a copy of Newsweek on the exam room table describing this phenomenon.
per the article:
"Through the first quarter of 2011, nearly 600,000 college-educated white men ages 35 to 64 were unemployed, according to previously unpublished Labor Department stats. That’s more than 5 percent jobless—double the group’s pre-recession rate. That might not sound bad compared with the plight of younger, less-educated workers and minorities, but it’s a historic change from the last recession, when about half as many lost their oxford shirts. The number of college-educated men unemployed for at least a year is five times higher today than after the dotcom bubble. In New York City, men in the 35-to-54 kill zone have lost jobs faster than any other group, including teenage girls, according to new data from the Fiscal Policy Institute."
Seems I’m not the only one freaking out about low pay and dwindling prospects. Meanwhile, as I went to pay my deductible, there was a Pharmacy Company rep at the receptionist’s desk, buying lunch for everyone (something that happens 15 times a month, apparently).
Because, that’s where the money is… in pushing drugs to Doctors… who then in turn get US hooked.
Meanwhile, it’s a game of ruses at home; trying to keep the bill collectors at bay (that’s got to be a terrible job, calling people up for unpaid bills) and projecting an air of nonchalance to the kids. I crunched the numbers, and, we’re looking at a huge plunge into the red over the next 18 months. And we have always lived very economically, no vacations, no outlandish spending. Which is a relief, since our somewhat frugal lifestyle has resulted at least in savings to burn.  According to a survey, over half the familys in the U.S. of A. have less than $2000 in the band in case of an emergency.
Of course, Princess Nomad is starting college in another year and we’re gonna have squat to offer in terms of $$$ for tuition.
None of this was in the “middle class white guy brochure” I was given as a teenager, that’s for sure.
The American Dream is now a Pharmaceutical aided coma (so states Captain Obvious).

Email ThisBlogThis!Share to TwitterShare to FacebookShare to Pinterest
Labels: crass, descendents, what the hell happened to me?

Things have gotten so bad your country cannot even afford to bomb the crap out of Syria.

I find all of this sort of comforting. I used to kick myself for being unambitious and not trying hard enough. It's nice to know it wouldn't have made any difference. Then again I'm single and childless.

Amen brother! That's what we get for being at the tail end of the baby boom generation. Other than rock n roll, they have been responsible for every self-serving, greed induced disaster over the last half century. The backwash and scraps they left for us has left a bitter taste in my mouth. I wish they died before they got old!

As a Jam fan (i know you are too), I'd rather use the term "Smithers-Jones" than BWM. That song gets right to mu gut when I hear of guys getting pink slipped.

i dig. nothing much has changed since thatcherism.