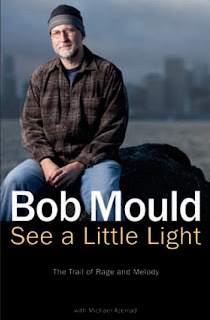 Currently, I am reading and enjoying Bob Mould's auto-bio "See A Little Light". A fine book, not as heavy on the soul searching as I woulda thought, given his cathartic oeuvre of music, but some good insights nonetheless. He doesn't savage Grant Hart as much as you would expect, given their post-Husker relationship. Actually, he seems to think less of Greg Norton- basically describing him as superfluous to Hu-Du (except for his driving abilities).

After finishing the whole book, I take back my initial perspective of Bob talkin  about his sexuality. He lays it on pretty thick in the second half of the book and  the second half of the book focus's much energy on his gay experience's (whether long term or "bumps in the night". He totally embraces gay lifestyle and is able to flourish in his adopted cities of NY, DC and Atlanta. Good for him- it certainly seems to make him a happier person. I think most people "back in the day" knew that the band was gay. It was a bigger shock finding out that Greg Norton with that handlebar mustache was straight! And despite the usual morons that were in any scene, I don't think that too many people particularly cared that Hu Du were gay.

I met Bob "back in the Hu Du days" a couple of times (and exchanged a couple of e-mails back and forth with him a few years ago) and he was always really really nice (as were Grant Hart and Greg Norton), so the "monstrous" anti-social behavior he describes in the book I never witnessed. There are some good insights into the Hu-Du songwriting and recording history, and I suspect the rest of the book will do the same for Sugar and his solo work. He talks about his drug use pretty candidly- ironically, the only time I ever saw him indulge was with a packet of powdered aspirin (we even asked him if it was coke and he showed us the envelope and it really was aspirin!)

It's also really cool to read his thoughts on some of the great shows that I saw the Huskers play- they were some amazing times for me, and it's always great to think about those old shows when both Bobby and I had alot more hair!

His stories about his subsequent efforts with Sugar and solo and with his electonica dj project "Blow-Off   are interesting. After all Sugar was a bigger band than Hu Du commercially. And Mould's tales of working for WCW wrestling were great. Punk rock!

I am relieved this isn't a "grouchy" look at his past- I hate those kind of "I hated every moment of my life" books. For example, I worshipped The Ramones, but after reading the various "tell alls" that were written about the "brudders", my memories of all the great times I had at their shows and listening to their music are a bit ruined since I know what miserable people they were.

Despite some rocky self hating moments, Bob at 50 seems to be a happy, well adjusted guy. Good for him!


I am posting some covers of Bob Mould penned Husker Du songs today- some really interesting stuff that I hope you enjoy.

(according to the book, Bob smiles at Grant after the guitar solo because he was so happy he nailed it correctly!)


Toonage:
Anthrax - "Celebrated Summer"
Sick Of It All - "Target"
Alloy - "Out On A Limb"
Jonas Jinx - "Something I Learned Today"

Your comments about The Ramones made me smile to myself. I am a big Warren Zevon fan. I think his songs are brilliant with the perfect blend of insight and humor. But I also know what a total bastard he was in real life which is why, even though I bought his tell-all biography about 2 years ago, it is still sitting on my shelf unread.

Also, as a gay man I am not surprised that BM's book doesn't dwell on it overly much. Being gay is a part of who I am - a big part - but certainly not the only part and probably not even the biggest part. If I had to pick, Rock and Roll had a bigger role in shaping the person I am today than did my sexuality. Without having read the book I am thinking it is probably very much the same for him.

He sure got out there to sell this thing....

Heckfire - he was even on the Great White North's National(ized) Radio Network. Which was OK but not that insightful or interesting mostly because the fill-in host was a wee bit clueless.

His appearance with DeRogatis and Kot on WBEZ was much better...I, too, found it interesting how gentle he went on Hart and the derisiveness he had for Norton's choice to play more golf than bass well before the break-up.

I also found his description of how he might have pushed too hard on tune choices such that it squelched overall band creativity to be fascinating and a reasonable measure of his efforts to be honest.

Finally, I really did dig the fact that he still considers Huskers (as he calls it) to have been the very best band of its time.

And ya, when he talked about how they worked together when they were at their furious peak... Well, that was exhilarating to contemplate - Even now, twenty five years later.