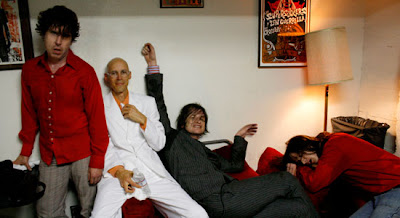 I saw Redd Kross the other nite in Brooklyn (aka Satan's Asshole). The brothers McDonald (Jeff and Steve) were awesome, as was non brother Roy McDonald on drums and Jason Shapiro (filling in for the Doctorate chasing Robert Hecker) on guitar.
They played a few songs from their upcoming Researching The Blues lp as well as a huge cross section of everything from their bratty El Lay punk roots (virtually the entire Born Innocent album) through their more mature power pop 80's and 90's oeuvre.
A great show and only a couple of times did I want to punch some scumbag Brooklyn Hipster in the face. 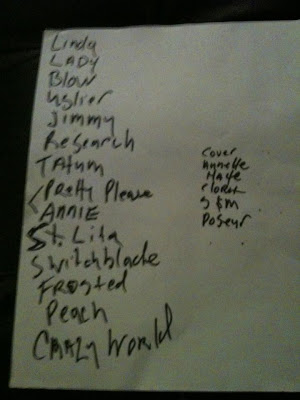 Cool beans. Robert Hecker is great with or without hair, but back-up gtrist Jason Shapiro is too! He played on everything CELEBRITY SKIN ever recorded, the only late-80's LA band with fashion savvy to beat that of REDD KROSS. Wish I could've seen it.

Shapiro didn't have the lunatic factor that Hecker has, but he was fine and dandy. I can't wait to hear the new "Reseraching The Blues " lp .