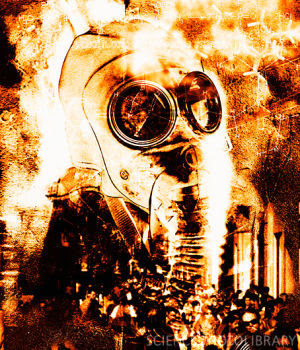 Here it was, a humdrum end of summer weekend and I was fighting the algae in casa de Nomad’s swimming pool.

Old Nazz had neglected the pool for a couple of weeks and the pool had become a launch pad for lily pads, mosquito's and the heavy green scum that is usually found in Louisiana Swamps. I was actually winning the battle, after throwing enough chemicals into the “water” in the previous few days to deforest most of South East Asia.

So, as I embarked to thrust the last dagger into the Pea Soup, I threw copious amounts of calcium hypochlorite (aka Pool Shock) and Chlorine into the filter. I waited the usual 5 minutes and opened the valve to put the cartridge back in.

The shit hadn’t dissolved and a noxious cloud of apparently semi toxic chemicals exploded in my face and which I breathed in. I immediately hit the ground and started gasping for air. As an added bonus, the stuff got in my eyes and I was temporarily blinded. I staggered to my bathroom and flushed out my eyes and tried to gargle/puke up what I had inhaled.

Two days later, I was still feeling dizzy and my eyes still burned so I called up Poison Control. The guy said I should have gone for medical treatment but that if I was still alive and able to breathe after two days I would slowly recover.

It’s two days later (4 total since my mini-Bhopal) and I’m still all chemically. Eyes sting, all foggy, bad taste in my mouth. I always figured if chemicals were gonna do me in (especially powdered ones,) it woulda been recreational.

Though I suppose a pool IS recreation.

Email ThisBlogThis!Share to TwitterShare to FacebookShare to Pinterest
Labels: big mistakes, what the hell was I thinking

You had me rolling with this, laughing at your expense. Glad the Nazzenator made it through.

Great line from poison control, one I heard when I took my first aid class. We do not spend much time looking at our troubles, no matter how toxic, with perspective. Consider your experience a metaphor for the upcoming (or not) Islander season