Tonite: Mr. Bob Mould for free in Satan's Asshole (aka- Williamsburg, Brooklyn) for free! Though I dread being surrounded by thousands of douchebag hipster fucktwats, there's no way I'm gonna miss this. Besides, that's why they invented al-key-howl... to put up with these "types" of vermin.

Bobby-kins is slated to play all of the Copper Blue elpee from his Sugar days (not my favorite of his albums or bands- I'd prefer him to play the Beaster ep if I hadda my cherce. But... between Copper Blue and some solo stuff and some Husker muthafuckin' Du stuff I'll be a happy camper. Beeeee-sides... Bobby's new album "Silver Age" is fucking great!!!!!!!!

I first saw bouncin' Bobby with the Hu Du clan waaaaay back in the early 80's -  Probably 7 or 8 times during the Metal Circus thru Warehouse era. Flying fuckin' V's, barefoot drumming and lotsa shreddin'.

Some "adventures" that will also need to be relayed on these cyber pages at some point... including showing up at a show in a dress shirt and slacks (after a student awards event) at Maxwells in Slobw-boken NJ during the Zen Arcade tour and having Grant Hart (my instant best friend from the previous nite's show at the Peppermint Lounge) burst out laughing and immediately install me as stage security- in charge of keeping the divers off the stage- needless to say, by midway thru the show I was shirtless and clad only in slacks! 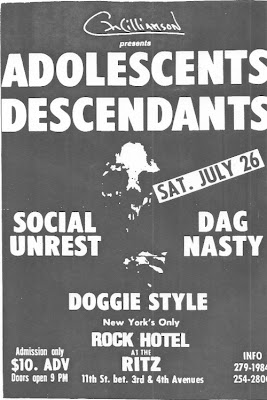 Tomoro: THE DESCENDENTS (and some other bands like Gogol Bordello and Hot Water Music)- MILO GOES TO BROOKLYN. Gawd- dealing with that venue 2 days in a row is gonna be a a bear, but I have to do what I have to do to.


Man- I am really psyched to see The Descendents again- another band from my yoputh- Songs like "Bikeage" and "Hope" and "When I Get Old" and "Rotting Out" and pretty much everything they've ever done are embedded in my heart and mind.

Plus... as an added bonus... it appears I will be interviewing Milo. I'll post the innerview asap-

Davey and I will be there to represent for our fallen comrades.

Nazz -- I will be other old guy there wearing a hardcore t-shirt at The Descendents. The last time I saw them (last year) it was all guys our age wearing Minor Threat, Black Flag, etc. shirts. I guess this time we will get diluted by rain or the Gogol Bordello Jugaloos. See you there

Rinjo- I assume you also got cock-blocked by the "fear of tornado's) We pulled up in the Nazz mobile just as the show was being cancelled. 3 minutes of rain. What bullshit. Then, we didn't find out about the "secret show" until it was too late. At least Bob Mould was great the nite before.

New song for the Descendents : "Suck-Age"