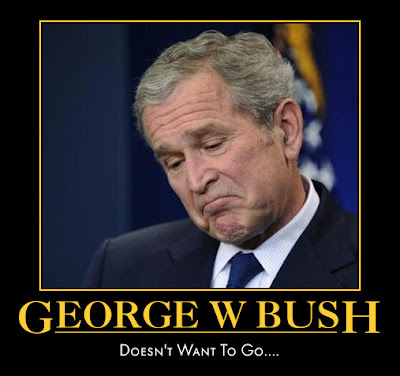 As we head into the sunset of the administration of the worst United States President ever, it is important to recognize Dubya for some of his positive accomplishments. He'll be doing it tonight on the tube, but, in the interest of fair discourse, your pal Nazz has some points he may not bring up.

Remember campers, the glass isn't always half empty, sometimes it's half full!

1) The Rapture has not occurred. Granted this is bad news to some of you. But back in the 2000 election, the big fear was that our nation's first "born-again" prez was gonna make this country the Christian Conservative center of the Universe. So far, ain't happened. Try as he might, it ain't happened! What's that you say? What's that about us being in the second coming of The Crusades?

2) Was not Commisioner of Baseball. Baseball has recovered nicely from the steroids/big market/strike scandals. If Gore would have won, there was a good chance Dubya (as a former baseball team owner) could have run baseball. In fact there still is. So I hope Bud Selig is taking his vitamins. Hey, Bush fucked up the country, but at least he left baseball alone!

3) We have not been invaded and conquered by extra-terrestrials. GWB has ensured that we are not under Saturnian or Martian or Neptunian rule since he has been in charge. Yeah sure, the Martians almost destroyed us, but thanks to Bush's "relaxed" standards on the environment, there were plenty of microscopic organisms to destroy the Martians. And we can blame the Japanese for this guy, not the good old USA!

4) As comedy is often born out of tragedy; 8 Years of great material for John Stewart, Stephen Colbert and Saturday Night Live. After all, how much mileage were they gonna get out of Al Gore (although South Park did a great show on Gore.)

5) The knowledge and security that we have seen the worst President we ever will experience. We have nowhere to go but up! (Please make him the worst ever, it can't get worse, can it?).

2) I can always get worse. and someday it will.

3) I'm pretty sure Dubya is more than eager to get the hell out of Washington, no matter what he says in public. Wouldn't you be?

cheney won't even be alive in 2012... whoops, I forgot, evil never dies.
Bernie Saunders could never run for national office... no way anyone who actually ran under the Socialist banner could ever win.

Jimmy didn't try and force his religious views down our throats, unlike Bush and his supporters, although by all reports the Christian Right was more pandered to and used by Bush than actually listened to.