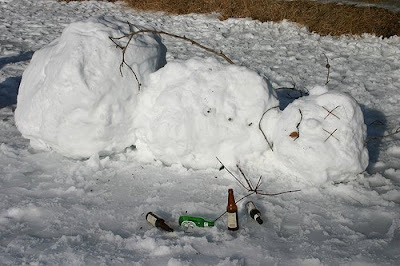 Mother Nature has attempted to stop us, but Dirty Pillows will ignore the snow, rain, hail, sleet and frost and rock the shit out of Brooklyn tonight.

Our promoter/guitarist wanted to have a live sex show onstage, but I told him if any skanky folks (who do not possess the last name of Pillows) attempts that kind of silliness, I will replicate Pete Townshend's response to Abbie Hoffman at Woodstock.

And here are my thoughts on Bruce Springsteen playing the halftime show at the Super Bowl:

Although, I would give my left nut to see him come out and play 4 dirge ballads from Nebraska, or maybe 41 Shots. Even playing Badlands would be cool. Or how about playing a silhouetted Phallic Guitar, like Prince? Or exposing Steve Van Zandt's nipple?

Please, Bruce, DO NOT play "Born In The USA"... the irony would be lost on the crowd. I know that people are actually handicapping the setlist... so here's my prediction:
Glory Days/Dancing In The Dark/Promised Land/Born To Run.

I don't care, Nazz Junior and I will be switching over to the Lingerie Bowl.

Sirs, I happen to enjoy Springsteen and his 70s- to earlyish 90s output,but that said: yes, it's not that big a deal about the super bowl,I agree. however, forget the lingere bowl, puppy bowl is where it's at!

I hate Bruce Springsteen and everything about him. Everything. Fuck Nebraska/