Law Of The Jungle 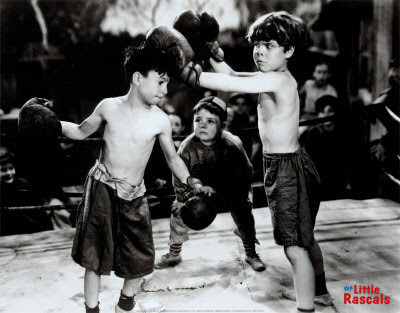 Nazz jr is a good natured kid. However, when provoked, he's got quite a temper.

As he is now in double digits, and starting a new school next year, I have been ruminating on teaching him how to fight.

While I do not advocate violence, I think it's important for a kid to know how to defend himself. I was a small kid and got picked on (at least till I hit puberty). Despite my dad's best attempts at sending me to Karate school and Boxing gyms, I never had it in my heart to fight back...unless I was really messed with. Than the eyeballs would roll back and I would go for the throat. But that wasn't very frequent. I would have been a happier kid had I the balls to respond violently before that "all of nothing" rage kicked in.

Once I hit 16, i was big enough that no one was messing with me. Over the years (largely thanks to Punk Rock and Alcohol), I've had my share of mosh pit hijinks and pre/post minor altercations; but only a few (thankfully) real knock down drag outs.
But the confidence that I don't have to go running from them should they present themselves has made me a lot more secure.

This mindset has possibly led to more trouble than if I would have remained more passive. But on the other hand, the aggressiveness might have helped me in business as well as personally.

So, my dilemma is whether I should teach the kid some martial arts so he is prepared for the inevitable schoolyard brouhaha, or to let him just work it out himself.

Well, take this with as big a grain of salt as you like what with me having no kids and being a girl. (As adolescents we specialize in vicious social war more than physical.) But I vote for the boxing. Is he really gonna use a karate move in a fight? I kinda doubt it. If you want to have it both ways, maybe kickboxing?

It certainly can't hurt to give the boy advice on what to do if he encounters a bully, to give him a clue at what point he should consider throwing a punch. These days schools are a lot more sensitive to bullying, because they don't want anyone coming back with a machine gun to get their revenge.

I think it may not be a bad idea, because it will teach Jr. that it's not the end of the world to get hit. It's not enjoyable, but at the very least, he will be able to tolerate it and move on, y'know?

I remember back in my youth getting into a few scraps, here & there. I learned how to defend myself on my own. Consequently, I'm going to teach my son (he's almost a teenager) how to take care of himself. Not start anything, mind you, but at least not get bullied around.

There is a big difference between violence & self-defense. I think karate teaches the above alluded to self confidence while also teaching the lesson of avoiding the first-strike mentality. I have a daughter, now 26, who took karate for years & has gained confidence & pacifism both.

But boxing is kool!

TaeKwon-Do. Best thing that ever happened to me as a youth. Taught me discipline, self-control and how to handle getting hit, it got me fit so I could always run further and faster than the other guy but it also taught me how to defend myself and hit somebody back harder than they hit me - if I ever needed to. Priceless.

Here's a weird one:

The Boy has been doing this for 6 years and is about to earn his second degree black belt. He could kill the Monkey if he was so inclined, but fortunately he loves his Daddy.

And you get to use swords when you reach black belt! Tell me you didn't want a sword when you were a kid!

Hey, thanks for all the good advice, folks!