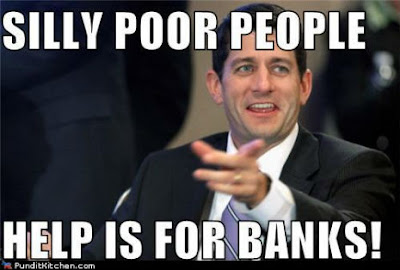 So, the Repugnikkkans have selected a VP for Mitt. And he's a fiscal conservative who wants to give tax cutes to the rich and screw the poor.

It doesn't really matter of course, by the time Romney died in office, this country would be so fucked by then that Ryan couldn't make it any worse.

In the last 2 elections, the Repubkikkkans have run a War Hero, a woman, a Mormon and a Catholic.

We live in strange times.

PS- Supposedly, the new Veep pick is a big Rage Against The Machine fan... somewhere, Tom Morello is rolling in his grave.

At least the Ryan pick had made the choice even starker - let's hope this turns even the senior vote against these bastards.

What's really sad is that the guy that calls himself Barack Obama has forced many of us to vote for this guy.

Maybe Tom Morello is rolling in Jerry Garcia's grave? I agree with Jeffens -- the GOP is doubling down on class warfare, which may help push the undecided vote (old and young alike) to re-elect the guy who calls himself the President.