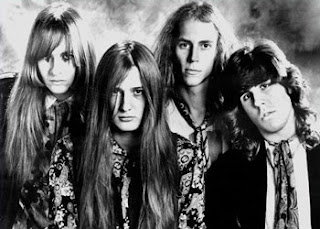 One of my all time favorite bands. Red Cross (notice the different spelling) started out way back in the late 70’s/ early 80’s as a total punk band led by the barely teen McDonald Brothers (Jeff and Steve). Other fellow travelers included Greg Hetson (later of the Circle Jerks and Bad Religion) and Ron Reyes (later of Black Flag).
They did a Charles Manson song and a song from Beyond The Valley Of The Dolls on their first record (Born Innocent) 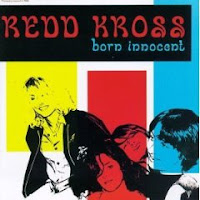 and then had to change their name to Redd Kross, since they were getting their asses in deep with the Red Cross.

After that album, they were joined by hippie freak Robert Hecker on lead guitar and quickly veered into a sorta acid casualty/70’s trash /punk glam thang and came out with Teen Babes From Monsanto… which was a cover album featuring songs from Kiss, David Bowie, Bewitched (yeah the TV show), etc. It kicked total and unadulterated ass and they followed this up with some of their L.A. compatriots on a movie called Desperate Teenage Lovedolls (playing on a Brady Bunch cover). 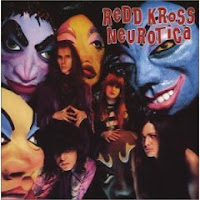 (man, one of the McDonald’s is a dead ringer for Neil from The Young Ones in that picture!), Third Eye and Phaseshifter. All fucking great and HIGHLY RECOMMENDED. In fact- go buy them now! 1997 brought Show World, which was poppier and lost its edge.

They broke up after that and recently reunited for some shows in 2006.

My memories of Redd Kross are from around 1983 or so. At The Ritz in NYC; which was this huge multi level concert hall (it’s called Webster Hall now) RK played with DOA, Toxic Reasons and (I think) the Circle Jerks. Me and my buddy Dave were outta our minds on lord knows what and sneaked back stage (no easy feat). We ended up hanging with Redd Kross, talking about Kiss Meets Phantom of The Park, Mushrooms and sneakin’ red wine out of our parent’s liquor cabinets. The convergence of Los Angeles long haired freaks (Redd Kross) and Noo Yawk City Punk rock hard-on’s (Me & Dave) was truly a perfect storm. I tried to pick up one of the Cali-chicks whilst pretending to be a surfer. That went well until she asked me what type of surf board I used and I told her I used an ironing board cuz I was so Punk Rock.

I have for your perusal three tracks from a radio show they did in Australia in the mid 80’s. This shows them more in their punk pop vein. The “overture from Tommy” (yes, The Who classic) is astounding.
Tommy
Trance
What's Wrong With Me

And as a basis for comparison “Cover Band”: from their first ep (note that the riff is later ripped off by the Circle Jerks for Live Fast Die Young, but I guess since Greg Hetson played guitar on both, all’s fair.)
Cover Band
And here’s one of my favorites from Third Eye:
Elephant Flares

And here’s some footage of Redd Kross from Phaseshifter : Jimmy's Fantasy
Have at em!

Ah yes! Redd Kross is one of my all-time faves as well. Great post, and good to meet ya.

Nice blog.
I would love to see you, or someone, anyone, post Teen Babies. I used to love that, and I don't think it's ever been issued on CD.

Great stuff! Just found your blog. I love Redd Kross, Rezillos, and the Angry Samoans. Maybe I will rip my copy of Teen Babes.

love Redd Kross.
you can get "Teen Babes" on the Trance cd. Amazon usually has it.

Hello, everyone! I think it is appropriate to write here, as here brought together people who know the band Redd Kross. Somebody tell me what you know about the song "It's a Scream" group Redd Kross. The official release or not? In any kind of official CD Group Redd Kross has it? Who knows, please give information about this song. I know just what it recorded as a Soundtrack for the movie "Shriek If You Know What I Did Last Friday The 13th." But, the official CD Soundtrack is no film. I found this song just as 160kbps. Can someone tell me where to download it in high quality (eg 320kbps)?

This question for Jeff McDonald or Steve McDonald (on Facebook, Myspase or reddkross.com - forum).

They have done one song It's a Scream for the 2000 film Shriek If You Know What I Did Last Friday The Thirteenth but no soundtrack or the song was ever released on CD. - wikipedia

Maybe this song just as 160kbps?
Let me know from new information. My english to bad, sorry. I'm not talking with him on Facebook, Myspase. May be you can?