The Pool of Serenity 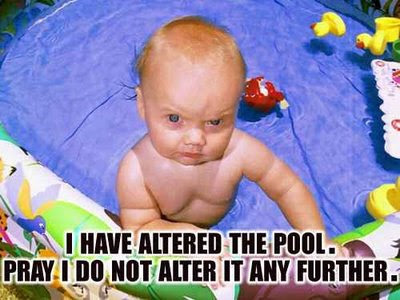 My summer solstice resolution is to not add fuel to the argumentative fire. I pledge to just walk away from Ms. Nomad's occasional bouts of verbal onslaughts ... NO MATTER HOW RIGHT I AM!!!!! It might have taken me 20 years to figure it out, but resistance is useless. There is no "win" scenario, at best a Pyhrric victory might be possible. I have a wise older cousin, who has fought the marital wars for longer than I, and he always advised me to just AVOID CONFLICT at all costs.

So... I will walk away when confronted with the chaos that results from two people being married for a looooonnnnggggg time..

Or, drift away. The pool is finally up and running... despite it's best attempts at putting me in the asylum. The leaks in the gaskets have been patched and seem to be holding, amazing what a tube of this stuff can do! At one point last week, after failing to get the deck re-attached, I just gave up and went to mow the lawn and curse the very day that swimming pools were invented; leaving the hard work to Ms. Nomad and Princess Nomad.

Whom of course were able to complete said task with-out Mr. Asshole's help.
I spent the weekend on the Big Daddy float, drinkin' this stuff and listening to Led Fukking Zeppelin.

Sooo, for this summer, it's just beer and frozen drinks and serenity now.
Insanity to come, later.

Dude, you're a guy - when it comes to 'heated debate' with our better halves we are never right, ever. I had to learn to shut my face cause I just got so fed up of losing.

When's the pool party? I will bring massive amounts of beer, albeit not wheat. Hate the stuff. Messes mit me sinus cavities seriously.

The pool party is every day! 'mon over!
Hmm... sinus probs due to wheat beer? I get sinus headaches from the nitrates in red wine and hoppy ales, but I've been ok with wheat beers.