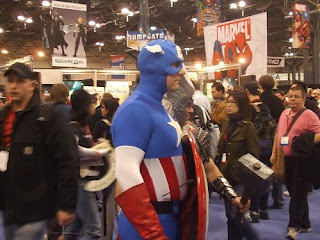 
So, Nazz jr and I spent Saturday wandering the great and never-ending jungle of the NY Comic Con. Located in the cavernous Javits Center, 70,000 freaks and geeks attended. 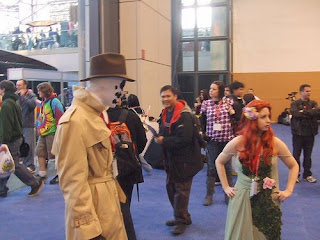 Rorshach and Poison Ivy
Let's start off with the awesome... The first 18 minutes of Watchmen was previewed (plus an add'l scene form the middle of the movie). Holy shnikes! It is perfect. The intro credits go a long way to explain the origins of the group up until when the graphic novel opens. The scenes, shot for shot are dead on. The illustrator of Watchmen, David Gibbons gave a talk and answered questions (one query was whether Alan Moore is insane).

My son and I, after viewing the footage, looked at each other and both agreed that this was a "day-ay-nu" moment; and that we could leave now and be happy.
But of course we stayed on!

We saw a couple of other previews as well... one for the new Friday The 13th movie (I think it's called Jason kills a nursing home) as well as an (unfinished) preview for Terminator Salvation (no footage of Christian Bale's freakout of course, but the host did call Mrs. Bale on the phone!). Terminator looked to us to be an explosion/noise fest, I hope there is a decent story line as well. It was hard to tell with all the special fx. 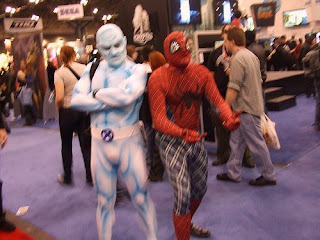 This guy was dressed up as a Plaid Spiderman. Is Spidey Scottish now?

And on to the floor... where everything from Golden and Silver age comics were for sale to previews of what's coming in video games to new comics to graphic novels.
As we were on a depression-like budget, we kept the purchases to a minimum, although Nazz jr. as usual won some raffles (a whole lot of Chaotic cards and t-shirts; as well as a kick ass Transformers 2 Movie Poster). He also got a nice set of Hellboy miniatures and some Halo Hero-Clix for decent prices. And of course, lots of free comics and graphic novels.
The most entertaining aspect of these things of course is the cos-play. We got such a kick out of all the folks dressed up as super heroes, anime and movie characters. 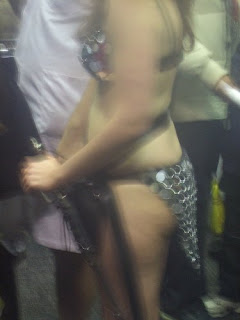 Red Sonja- I don't think her parents let her out of the house like that! 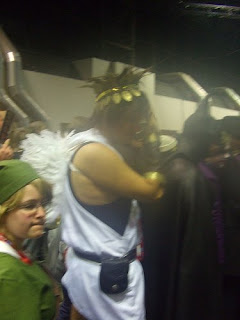 This was a big hairy guy dressed up as a fairy. That's one brave guy.
There was a costume contest. Additionally , on display was a demonstration by the NY Jedi... who actually dressed up as Jedi and act out light saber battles. Sorta disappointing, as no one was actually killed. After all, we're NY'ers- we see real violence every day!
There was also an area where geeks were pummeling the crap out of each other with foam wrapped wooden sticks. Highly stimulating! People were placing bets on who would win!
We missed the Zombie prevention presentation, but I feel that we are well read on those situations.
And I was able to pick up Mrs.Nomad's b-day gift... she's been looking for the entire collection of the 1960's Batman TV shows and I found a 10 DVD set (from the original reels... unedited).
All in all a very enjoyable, long and fun day. The best part of course being Nazz Jr telling me what a great time he had.

Toonage:
The Fugs - Supergirl
Down By Law - Superman
Ani DiFranco - Superhero
Shorty Long - Devil With The Blue Dress
Posted by Nazz Nomad at 10:51 AM

aaahh, you should have added Rancid's Sidekick to the mix.

Gibbons answered the Alan Moore questions by saying that he "was bat shit crazy". After everyone laughed, Gibbons said that Moore is on of the least crazy people he knows.
But, I think there was much truth in his jest!

I'm too old (and cranky) for cons nowadays, but I'm glad to see the younger generation getting into the scene.

Is this the Batman set?

The dvd's look different, but it's gotta be the same one.

Lemme know what you think of the quality upon watching with eyes...I really want Batman on DVD!!!

ugh. i got offered a chance to volunteer at a booth there this year-- shoulda taken it, but wasn't in town for the training session. . .

the rorshach at the san diego comic con that i saw a few years ago was super spooky and way into character-- so much so that he had decided his badge didn't fit his costume and he got yelled at by the guards.

glad you guys had a good time!