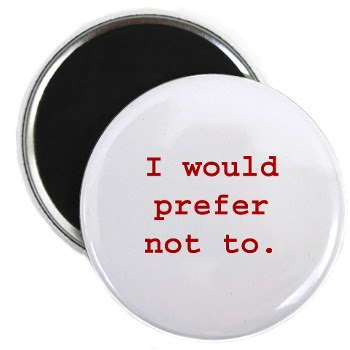 I am currently writing in agony due to the stupid hubris that entailed me playing in a company softball game that has re-injured my back. I should have known better, as I have herniated disks and I was sore during warm-ups. But instead of course, I figured it would loosen up and proceeded to play extremely hard for the full game, diving and sliding on several occasions.
So, the past three days have been a steady procession of severe agony followed by pain pills which have left me somewhere orbiting the planet "head-nod".
I hate taking pharmaceutical drugs for medicinal purposes. Vicodins are supposed to be for recreation, not curative reasons!
The lesson of course is, when asked to play, I should have said "I prefer not to".
Meanwhile, Nazz Junior finished up his Little League season kicking ass and taking names.
On the rock n roll front, Nazz Junior decided that he would do a Bartleby The Scrivener trip on his teacher. He's graduating grade school next week and has decided that he would prefer not to sing the graduation theme song with his class because "It's lame and it sucks". The teacher is not thrilled about this; as he is the only kid in the graduation class exercising his rights. We have reached a compromise in which he has promised to lip-sync and fake it.
That's cool. I'm so proud.
Even cooler is that he is not going to the graduation dance party; since he decided that his graduation present should be to go see Aerosmith and ZZ Top that nite.
5th grade, and he's already the coolest kid in school!
Toonage:
Aerosmith - Toys In The Attic (live NYC 8-29-75)
ZZ Top - I'm Bad, I'm Nationwide
Cat Stevens - Father And Son
Die Toten Hosen - If The Kids Are United (Sham 69 cover)
Posted by Nazz Nomad at 10:08 AM

You have got one super cool kid! You and Mrs. Nomad deserve to be very proud. Hell, I've never even seen Nazz Jr. and I'm proud of him. Give 'em hell kid!

If it pleases your parents, it ain't rebellion. It's conformity.

well, he is a freakin Red Sox fan... and that's about as anti-me as possible!

That's better than nothing, I guess. But if he were a real rebel, he'd write off baseball altogether and devote his time to Newt Gingrich's upcoming presidential campaign.