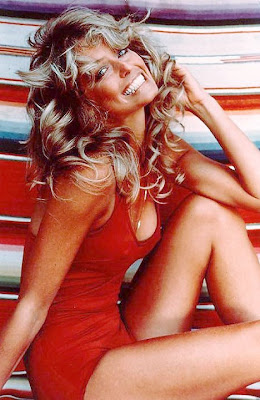 I dismiss the "celebrity death's come in three" concept; since these daze, EVERYONE is a celebrity.
However, I find it interesting on the parallels and paradoxes on the madness of Farrah, Sky and Jacko.
Each responded to their early celebrity in such iconic ways:
Farrah Fawcett- Could have been completely chewed up ala Marilyn Monroe in the Hollywood bimbo machine. Yet she became a serious, award winning actress. Sure, she got a little loopy in her later years, but no one can say she didn't redeem herself. Cancer fucking sucks, and the way she courageously (and publicly) fought it should not be forgotten or underappreciated.
Sky Saxon - Teen 60's dream Tiger Beat hit-dom. And then a descent into obscurity and most definitely counter culture alt-dom. Ironically, he was about to tour again.
Michael Jackson - Is it even possible to seperate the man from the circus freak? Has anyone besides Elvis ever been as completely twisted by early fame as him? Think of the 10 year old lighting up the stage, not the twisted man-boy of the last 20 years.
Rest In Peace

Just loved that whole Nuggets series, and The Seeds were a notch above the other garage bands on that compilation. Pushin' Too Hard IS punk rock before they had a name for it!

Didn't know about Sky either... that news didn't make it across the pond... or if it did, it was disregarded in favour of Jacko. Almost a week on, and it's STILL the front page of every newspaper. Even Farrah was big news for about 6 hours, then completely disapeared. Thats your caring press for ya!