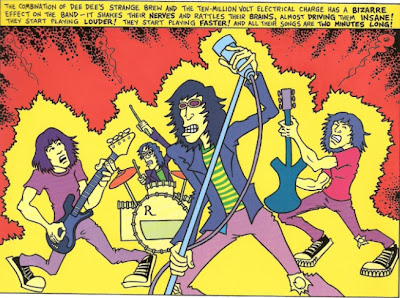 Currently, I am reading Main Lines, Blood Feasts, and Bad Taste: A Lester Bangs Reader.
For those who don't know, Bangs was the best rock critic of the 70's... back when rock n roll supposedly still meant something. His treatises/battles/ruminations on Iggy and Lou Reed in Creem Magazine as well as other rock rags are classic. Long after he was fired from Creem he was still winning best rock writer awards in the mag!
The "fatherly rock critic" in the odious movie "Almost Famous" was based on him.
Reading this (also recommended is his collection: Psychotic Reactions and Carburetor Dung) has made me feel totally inadequate. The writing, both in a stream of conciousness/drug fueled rampage and PASSION are so beyond the scope of anything that is produced today. Bangs was a guy who could postulate on the Pro-Christianity of Black Sabbath and in the next instant both praise and condemn Keith Richards for his drug abuse.

And, from the amazing Persons Unknown (Punk e-books and articles) blog, immediately go and download THE RAMONES COMICS... a collection of awesome gags, graphics and tributes to Da Brudders.

Christ, do I ever miss the Ramones.

Holly And The Italians - Tell That Girl To Shut Up

Me First And The Gimme Gimmes - I Write The Songs

Jawbreaker - The Boat Dreams From The Hill

Email ThisBlogThis!Share to TwitterShare to FacebookShare to Pinterest
Labels: holly and the italinas, jawbreaker, jeff buckley, lester bangs, me first and the gimme gimme's

I'm eternally grateful that I lived in Detroit and read Bangs just before punk happened. Detroit radio played the proto punk canon and Bangs supplied me with the theological underpinnings. There weren't very many of us who lived in the decayed inner cities and got the music, but by golly we were ready.

Not a fan of punk, here. I do give you props for mentioning Black Sabbath though.

I have a soft spot for Almost Famous partly because they chose Seymour Hoffman to play Lester Bangs (and he is not fictionalized at all, not even in name.)

Yep, if you leave a comment on Wil Harrison.com you automatically get a visit from Heff. It's just like death and taxes, LOL.

I used to read Creem "back in the day" but I don't think I realized at the time how great that magazine and Lester Bangs were.

It's probably better they folded than to have grown up like Rolling Stone has.