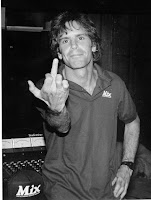 Hey maannnn, let's go catch the Grateful Dead at the free concert in Central Park.
Well, it ain't the Dead no mo, it's Bob Weir & Ratdog. It ain't a free concert, it's about $45. And while it's still Central Park, it's an enclosed amphitheatre.

Any you know what, that's just FINE BY ME!
I'll take what I can get. Pigpen's dead over 35 years. Jerry's been dead almost 12 years, thanks to these. Four dead keyboard players. The rest of the Dead have scattered to the 4 winds. At least we still have Bobby, relentlessly playing and touring. And what's with that beard? Wasn't he the "cute one"????
But play they do... and while Phil Lesh tends to explore the outer dimensions of the music with Phil & Friends and Mickey Hart's got the "world music" thang, Bobby keeps things in the more song oriented spectrum (at least for the most part).
Shit, he even plays plenty of Jerry tunes. And the non Dead stuff sounds pretty darn good too.
And while your mileage may vary, the last few years of the Dead (let's say the post coma Jerry 1990's) were often not stellar shows. A large percentage of head's were there for the party and not the music.
There are strong rumors that the Grateful Dead bus woulda been parked even if Jerry didn't die; especially after the Spring 95 "Tour From Hell".

This Ratdog tour brings Steve Kimock back (taking the place of Mark Karan, who is battling throat cancer).
So, I can't wait! I'll be wearin' my combat boots and my tie dyed Black Flag shirt (maybe) ; so if you're at the show, don't call me "bro"! I hate that shit!
Toonage:
Ratdog live 9:30 club Washington DC 3-31-04
(disc 1):
Dark Star Jam
Jack Straw
All Along The Watchtower
Dark Star (1st verse)
Odessa
Ramble On Rose
She Says
Two Djinn

ok, i admit to being a semi-dead head in high school. don't tell anyone.

i dug 'from the mars hotel' and that live record 'reckoning.'

Music can be like food -- we don't hafta just like one thing, we are free to enjoy as we want. Some of us might really identify most with one thing but are still able really dig a whole wide array of stuff. While I'm a Deadhead, I've seen The Cure three times, have mixed in at a few Ramones shows and in a Jane's Addiction moshpit. I watched that Live Earth wing ding on TV and Bon Jovi was really good while the Smashing Pumpkins were hands down the best band of the day from any continent!

Anyway, great post, thanks for the setlist, hope you had a great time! Catchya later...

P.S. late years GD had a lot of good moments, some even great moments... but go blow your mind with some '69 stuff and you'll have reason to tell anyone who says Jerry Garcia wasn't a great guitar player that they're freakin' nuts.

Shit man, Phil's waaaaay more of a punk than that girlyboy Darby Crash ever was! Punk may be dead, but not GRATEFUL dead, no way no how!

Enjoy the show. It's gonna be good.