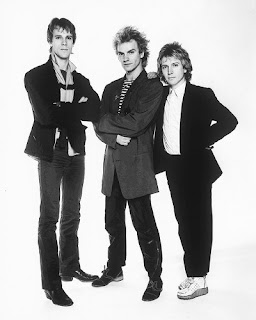 I am going to see The Police at Madison Square Garden tonight.
The last time I saw Stink & company was in 1982 or 1983, a show memorable for two things. The first was that the P.A. was playing Dead Kennedys music before La Policia took the stage. The second is the copious amounts of intoxicants that we consumed whilst sitting next to a mom and her 12 year old kid. Welcome to rock n roll sonny boy.

I have mixed feelings about tonight's show. On one hand, hey what the hell, it oughtta be at least decent (and potentially very fun). The Police have got plenty of great songs (almost all of the Outlandos d'Amour lp and most of the Reggatta de Blanc lp) On the other, if it's gonna be a great big audience blow-job to Stink, I might puke. I'm all for global responsibility, human rights and tantric sex; however, there is something about old Gordo' that just pisses me off.

From an interview I read in some old hippie rag, it seems that Copeland and Summers aren't exactly in love with his Stinkness either.

Initial reports of the live show placed everything as being performed at about 3/4 speed. And if Stink starts doing the jazz bullshit, I'm gonna go down to the stage and take his bass away and play it myself.

I have heard lately that they have picked up the pace, and are actually expanding the tunes a bit and jamming. We'll see.

My big decision will be to whether to take a piss break for "Doo Doo Doo Dah Dah Dah" or for "Every Breath You Take".

Report to come once I'm sober.

The Police - The Lost BBC Tapes

Email ThisBlogThis!Share to TwitterShare to FacebookShare to Pinterest
Labels: the police

Man, you are one brave mu-tha-fuck-a. I can't even get my head around the kinda balls I'd have to muster to go see STING (oh right, and THE POLICE) live in 2007. Nuts!

That said: didn't Stu Copeland play on some jammy UK prog records in the mid-70's? Yeah, he's clearly got the potential, all's he's gotta do is FIND HIS JAM!

actually, a very excellent show. (made better by some excellent tickets- i would have hated to not have been very close to the stage, since the videos screens were small and there was no show of any kind),
the police played all their "greatest hits". only disappointment was they played "Truth Hits Everybody" at about 50% speed. aside from that , they rocked hard. stewart copeland looks like he is having alot of fun on stage.

Oh, and Stink cured all the lepers.

I personally think they are playing up there not getting along. They are all friends-- maybe not BBF-- and there are some deluded souls out there that actually think this might turn into a permanent situatiion.

I saw them here in Houston in June with the same apprehensions you expressed. All in all I was pleased (good seats help), but it could have been a more up-tempo overall. Yup, Stewart Copeland's playing and obvious enjoyment was the highlight of the show.

Not bad, huh? I told ya Sting went from soft rock wuss to cool again. Just from the recording I listened to (the Hershey show) and seeing The Police play a few songs at Al Gore's "All I Wanna Do Is Save The World, Please Help Me Do This, It's My Destiny" Live Earth show, yeah, you could tell Copeland was out of his skull happy with playin' these songs live in this setting.

Still -- could be better... but then again Copeland and Sting-a-ling-a-ding-dong are 55 and the other dude's 65... could it really be better? In a club, yeah, but legends get old.