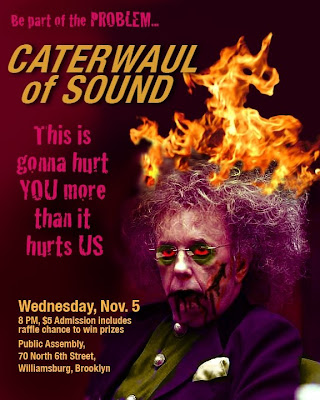 Hey cave katz and kittenz. We have a gig!!!!

CATERWAUL OF SOUND!
We are playing at a really nice place in Brooklyn on 70 North 6th street (right next to the music hall of williamsburgh) called Public Assembly (it used to be Galapagos). Frankly, it's a little TOO nice!

But we're treating it like an Obama victory party. And if the unthinkable happens and Geriatric John and Caribou Barbie are elected, well then, it'll be ground zero for the oncoming revolution! Dope, guns and fucking in the streets (or something)!

We're gonna be playing in the best traditional of yer fave garage bands... heavy on the three chords (you all love the "A" chord, right?) and lots of noise. Combine Johnny Thunders with Syd Barrett with Angus Young and yer gettin' close!

It's gonna be alot of fun, there are 5 or 6 other bands playing too... ranging from goth to cookie monster metal to rollins like fury.
And it's only $5 (cheap!). There's gonna be raffles for craptastic treats too!

So, come see yer Uncle Nazz do things to a bass gee-tar that are illegal south of the Mason Dixon line!

We're trying to make it a special nite and hope you will share it with us!

Here are some trick or treatin toons!

I took a holiday from work as I CANNOT MISS THIS FOR THE WORLD!!!

I knew you wouldn't let us down on Halloween! Thanks! By the way, Box.net is so much easier to use than the other host you use. Thanks again!

How about a tape of the show for those of us without magic monkey wings!

Congrats on getting the gig! I'll be nowhere near NYC anytime soon, unfortunately, but I'm sure it'll be a blast.

We are making plans to videotape the show as a guarantee against any of us ever being able to run for public office.

Great image. BEWARE, I AM SPEK-TORR!