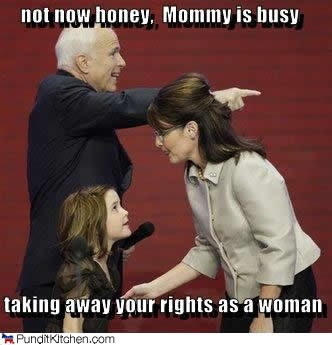 The home stretch. Less than three weeks before we get to vote for regime change. I can't wait.

How will the Repugnikkans steal this one? Voter fraud? Pre-programmed voting machines? Armed guards preventing voters from getting in? The possibilities are endless!

Whatever. Nevermind. As long as we still have rock n roll, how bad can things be? Oh yeah. Bad. Real bad!

But today was one of those days when the right batch of tunes came over the mp3 player on the commute in. The kind of songs where you get that feeling of "holy shit, I forgot what an awesome song this is". And then you hit reverse and play the fucker again and again, singing out of tune and messin' up all the words as the people around you think you're insane.

King Khan And His Shrines - Land Of The Freak

New Bomb Turks - Chip Away At The Stone (Aerosmith cover)

This is the second time today that RUN DMC has come up. About 10 years ago I was at a NYC restaurant that was pretty crowded. DMC and his girlfriend/ wife/ whoever sat right next to my girlfriend and I. he was really cool.. "Hi, my name is Daryl and this is.. Sorry to crowd you". It took me a few minutes to recognize him, but maintained my "don't bother the famous/ infamous/ crminially insane" policy. At the end of the evening just told him it was cook to meet 1/3 of RUN DMC. He thought that my reference to "1/3" was amusing. Cool guy-- that night anyway

Come on now, no criticism of the Democraps? You don't see them as innocent, do you?

Our two main political parties are equally corrupt. And last I heard, no Republicans are registering 7 year old girls to vote (allowing someone else to use her name to vote for Obama.)

But at least, NOFX tomorrow!

no argument that the dems are bad. just not as bad as the repugs. and besides, we vote for the machine on election day, not the candidate. the dems will curtail obama from any potential "socialist/communist" impulses (as the repugs have been threatening).
if mccain is elected, the supreme court goes further to the right, big business gets bigger, oil prices go up, the war escalates - all of which the last 8 years have shown to be the gop's agenda.

it will actually cost me $$$ in less tax refunds if obama is elected. i consider it money well spent.

after 8 years of red state rule, it's time to let the blue crew have a shot.

Good music definitely helps. The song "Truth No. 2" by the Dixie Chicks ("You don't like the sound of the truth comin' from my mouth..." got me through the Iraq war in 2003. And Rage Against the Machine. I'm glad they're playing shows again, but where were they when we really needed them?

Ah well, not much longer now.

I just watched the last installment of the presidential debate on UK tv last night, Nazz. The last one I watched allowed both candidates to walk freely about the studio floor with handheld mics; this opportunity leaving McCain looking like Hughie Green, or the son of Tricky Dicky.

He appeared to fare as badly sitting behind the podium while taking notes with that horrendous rictus which passes for a sardonic smile. He is one flaky, oily motherfucker. Add to which; there is seemingly as little substance to his policies as to his woeful attempts at empathy with the public at large. Or Joe the fucking plumber.

You are CLUELESS. Palin is a good woman. The Demorats tried to steal the 2000 election (this is so old and proven the only ones still thinkking this are the most clueless of the liberal retards).

ACORN is trying to steal the election! 0bama is connected.

Maria! Are you kidding? Palin is as anti-woman as they come. She believes in no birth control at all except the rhythm method, is anti-abortion even in the worst of circumstances, considered her daughter's pregnancy a "choice" even though she had no actual choice, is behind her 19 year old daughter's wedding to a (now) high school drop out and father of the impending child, wants creationism taught and wants to ban books that have information *she* doesn't agree with.

She also fought to have polar bears taken off the endangered species list and believes that climate change is only through nature (man has NO hand in it). She is a danger to all Americans and the world as she is far too close to the actual Presidency.

I do agree that ACORN voter registration workers did commit egregious sins filling out fake registration forms to accrue more money for their "work", I don't think that Obama is behind it. He has far too much on his plate than to worry about fake forms. Anyway, there is no data to suggest that these phony voters are overwhelmingly Democrats.

And color me a retard, but yeah, the Republicans did steal the 2000 election. This is a "proven" fact.

ACORN is trying to steal the election! 0bama is connected.

Their is big difference between registering someone to vote and actually voting. If Jimmy John or the 7 year old actually cast votes-- then we have an issue. But if I.P. Rainwater is a registered Democrat in Ohio than so be it...

Never heard that New Bomb Turks cover before-- must be from the Epitaph years (when I stopped paying attention) I'm guessing. Good one.