Radio Birdman were probably the first punk band in Australia. 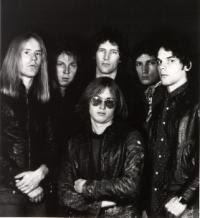 They were started up in 1974 by Rob Younger and Michigan born Deniz Tek (they got their name from the misinterpreted lyrics of the Stooges song "1970" (Radio Birdman = Radio Burnin’). The band took the hard driving musical styles of Tek’s fellow Michigan-ite’s The Stooges and MC5 and forged a proto-punk sound that laid the foundation for future Australian Punk bands.

Releases include the seminal Burn My Eye ep in 1977 and the lp Radios Appear (name taken from the lyrics of a Blue Oyster Cult song!)
The song “New Race” incurred a backlash (as did the Radio Birdman logo) as the band was accused of being closet Nazi’s; a charge the band vehemently disputed.
The band was short lived. No commercial success and a volatile relationship between several band members spelled the end for the Radio Birdman by 1978.
The band reformed in 2006 with the excellent Zeno Beach and toured the USA for the first time ever.

Radio Birdman just announced a tour of the USA for June and July . 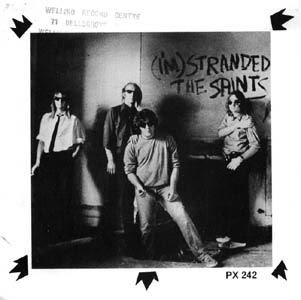 are the band most people think of when the topic of Aussie Punk comes up.
Stooges freaks (as were the Radio Birdman), their 1976 I’m Stranded album is a Punk classic (and the song "Stranded" is on virtually every Punk compilation album of the past 30 years!). Eternally Yours, released in 1978 is terrific as well.
They have reformed repeatedly over the years and just played the SXSW conference in Austin Texas this past March. An American tour is in the works for this summer.
A new album Imperious Delirium will be released mid October 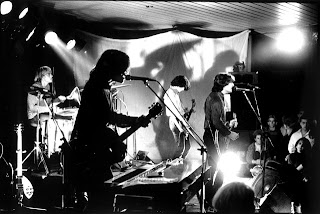 They are more of a garage punk band, taking their cue from the mid 60’s, rather than the late 60’s.Started by Dom Mariani and Richard Lane in 1984, The Stems only released one album and a few singles before breaking up. The Stems were the Australian branch of the 1980’s “Paisley Underground” trend featuring Fuzz-tone guitars and snotty vocals. Their 1987 album At First Sight Violets Are Blue was a huge hit in Australia.
Yep, they reformed too (in 2003) and are out there touring occasionally with a new album expected later this year.

Email ThisBlogThis!Share to TwitterShare to FacebookShare to Pinterest
Labels: australia, radio birdman, the saints, the stems

You just made my day! I had no idea Birdman was coming back to the US, and this time they're playing Atlanta! I just started reading Clinton Heylin's latest book, "Babylon's Burning"; there is an excellent chapter about Radio Birdman and the Saints.

I'm Stranded/No Time, was one of the most perfect singles ever.

I'd have to claim At First Sight by the Stems as one of the most perfect songs ever. There is nothing that makes me swoon more.

I just wanted to say that I think you're doing a great job with this blog. I just found it the other day, but haven't had a chance to leave a comment yet. I'm going to link to your blog if you don't mind. My blog address is http://digitalmeltd0wn.blogspot.com

The coloured balls (fronted by Lobby Loyde) pre-date the birdman and the saints. First Supper Last was recorded in 1972. Originally entitled "Rock Yer Arse Off", it was not released until 76. Ball Power was released in 1973.