The Clash - Give em enough Hope 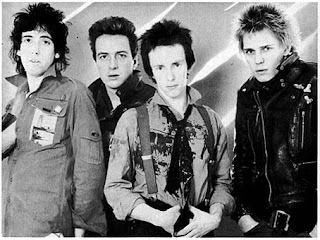 This week, imma gonna post up some Clash stuff. Were they the greatest punk band of all time? Were they the most important? Were they the only band that mattered? Well, no, no and no. But, for about 3 years, they came reallllll close. And Joe Strummer might have been the most sincere punk. Of course, here in the USA, they never became the standard bearers that they were in Britain.

In fact, in America, their second album; Give Em Enough Rope was released before their first eponymous named album was. Album #3, London Calling, released in the fall of '79 was the 180 degree turn away from the shackles of Punk Rock and is among the most critically acclaimed albums of all time (for whatever that's worth!).

And then Sandanista came out and it all came falling down. A triple album set that featured everything from Rap to Gospel to children singing old Clash tunes, Sandanista was an overly ambituous death knell. Virtually every type of music was represented. That is, except for punk. The only tune that could even be considered rock was "Police On My Back" and that was a cover tune. I remember when it came out we were all pissed off how they had completely dismissed rock and roll. They even had 3 "rap" tunes. Blecch. That viewpoint has softened over the years. A really good single album could have been distilled from Sandinista.

Combat Rock was a huge hit since it had "Rock The Casbah" on it and was played relentlessly on mtv. And of course , all the jerk-off new wave dance kids just looooved "rock The Casbah". At least some of the songs on it were decent (like "Should I stay Or Should I Go" and "know Your Rights"). They started playing stadiums (whilst on tour with The Who!) and lost all relevance. Mick Jones left the band, Headon was a junkie and Strummer and Simonon carried on with Cut The Crap and than it was over. 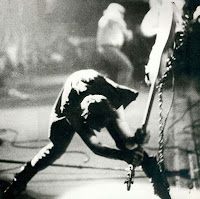 But we come to praise The Clash, not bury them. Today, a feast for your ears... The famous 1979 show from New York City's Palladium. Originally broadcast on New York radio, this is a terrific recording of The Clash performing songs from their first three albums (including previews of London Calling). This is also the show from which the London Calling cover image of Paul Simonon smashing his bass is taken from.
Plus, some additional rare stuff. Have at em!

great set of posts! thanks!! the clash are one of the few bands i try to grab live shows/bootlegs for, so thanks so much for posting all this :]

i hafta say, though, combat rock gave us "straight to hell", which i consider one of the most heart-wrenching, powerful, and important songs of their catalogue. but i agree with what you're saying. even on the singles box set (that massively ridiculous but oh-so-pretty thing they just released) the comment on rock the casbah is some chick talking about how she thought they were saying something else. it's like. . . errr. . .

for greatest punk band of all time: R-A-M-O-N-E-S
for most politically provacative:
Crass. The Clash (with the exception of Joe Strummer) were force fed much of their politics and imagery by their manager)
for most important (UK)- Sex Pistols- say what you want about them, but the Pistols were the "face" of Punk Rock in the UK.

of course, your mileage may vary...

Rock The Casbah got played so often in my college bar (and the resultant squids dancing to their conception of "punk rock") that I couldn't hear the song with-out gagging.
Straight To Hell is a classic tune, so is Should I Stay Or Should I Go, and of course Know Your Rights "THIS IS A PUBLIC SERVICE ANNOUNCEMENT. WITH GUITAR!!!!!!

But was Allen Ginsburg really needed?

No, he certainly was not! That is my biggest gripe about the record. That awful monotonous "-opolis" rhyming really gets me. Erghh. I'm afraid I don't appreciate that sort of poetry.


"who threw potato salad at CCNY lecturers on Dadaism and subsequently presented themselves on the granite steps of the madhouse with shaven heads and harlequin speech of suicide, demanding instantaneous lobotomy,

who in humorless protest overturned only one symbolic pingpong table, resting briefly in catatonia,

returning years later truly bald except a wig of blood...."

Howl is a classic. And the Clash were exerting their revolutionary power in including him in a song on a punk album.