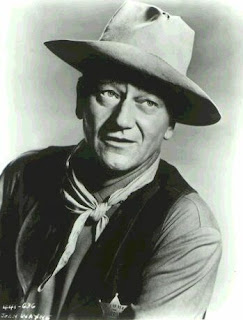 This week marks the 100th birthday of John Wayne.

He single handedly won World War 2 and was also instrumental in winning the Civil War, The Mexican War (well, we sorta lost that one at The Alamo!), The Spanish American War, The Korean War and The Viet-Nam War (Viet-Nam was technically a tie).

If John Wayne was alive today, the problems in the Middle East would have been solved in 3 days. 4 days at most.
And of course, if it wasn’t for John Wayne, the USA would have never been able to push the American Indians off their land.

There is evidence that his participation as an actor in “The Conquerer” was responsible for the cancer that eventually killed him (over 70 people involved with that movie developed cancer as a result of bomb testing in the area where it was filmed).

Buddy Holly paid tribute to The Duke’s role in the classic western The Searchers with the song “That’ll Be The Day”.

John Wayne had a military deferment due to an ear infection and never actually served in the armed forces.

John Wayne died in only 8 of his movies.

He had 2 way mirrors installed in his house and when the workers came to his house, he greeted them in a dress!(courtesy of Repo Man).

All kidding aside, the man was a legend and was active in many charities.

HAPPY BIRTHDAY TO THE DUKE!

John Wayne – Why Are You Marching, Son?
John Wayne – Drunken Speech to college students in the 1960's
The Beatles - Happy Birthday, John
Tennessee Ernie Ford – Ballad Of Davey Crockett
The Stains – John Wayne Was A Nazi
Foo Fighters – My Hero (acoustic)
Willie Nelson - My Hero's Have Always Been Cowboys

Pansy Division – Cowboys Are Secretly Fond Of Each Other
Posted by Nazz Nomad at 10:44 AM

"Courage is being scared to death but saddling up anyway" - only wish this quote finished with "Son".