For many of us white and lazy mofo's, the Replacements were the representative band of our extended adolescence in the 1980's. 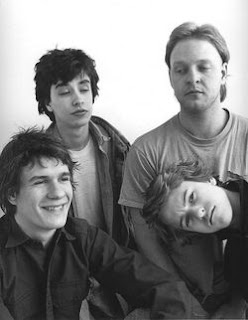 Common touchstones of drunken unpredictable behavior; combined with a 1970's musical heritage of classic and punk rock defined both the band and their fans. Many was the night where it was a toss-up between the 'Mats and the audience regarding who was more wasted. There was a nite in NYC around 1983 when we were going to see them (at Folk City, of all places!) when we ran into lead guitar player Bob Stinson wandering around Bleeker Street, completely hammered and wearing a dress. We had to literally carry him into the club.

Of course they kicked ass that night. Bob was eventually thrown out of the band (passing away a couple of years later) and the 'Mats were never the same; as they became a vehicle for Paul Westerberg's sensitive singer-songwriter aesthetic.

Chances are, if you're reading this, you might have your own Replacements stories.

Also noteworthy was their appearance on Saturday Nite Live in (about) 1984. This was the show where they changed clothes with each other for their second song (except for Bob Stinson, who was wearing a pants suit cut down to his crotch). Apparently they were drunk off their asses (gee, what a surprise) and Westerberg screams out "Motherfucker" during Bastards Of Young. They were banned from the show after that.

Great post. Thanks a lot for the two live shows! Love your blog.

I love The Replacements.

All of my life

Live mats? You're a feakin' superhero!